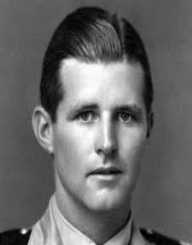 Joseph P. Kennedy Jr. attended Choate School in Connecticut in the USA. He did a year’s course with the London School of Economics in 1933, before enrolling at Harvard University (1934-1938). He then went on to Harvard Law School but left before he had completed his studies (1941) because of World War II (1939-1045). He volunteered as a U.S.Navy flier and was presented with his wings in May 1942.

Initially, Joseph P. Kennedy Jr. flew in patrols in the Caribbean and then in September 1943; he was sent to fly B-24’s with the British Naval Command. Kennedy was killed in action on the 12 August 1944 while flying on a top-secret mission when his plane exploded over the English Channel.  He had been given the opportunity to go on leave and encouraged his crew to do so, but he remained behind and volunteered for the special assignment.