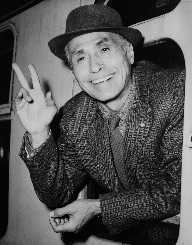 Jose Arcadio Limon was born on January 12, 1908. He was a dancer and choreographer. He is popularly known for the development of the ‘Limon technique.’ He was the founder of the Jose Limon Dance Company in the 1940s. Currently, the company is known as Limon Dance Company. In 1968, he established the Jose Limon Foundation. He died on December 2, 1972, at the age of sixty four.

Jose Arcadio Limon was born on January 12, 1908, in Culiacan in Mexico. He was brought up alongside eleven siblings. In 1915, his family moved to Los Angeles in California from Mexico. He attended Lincoln High School. He later enrolled at UCLA where he majored in art. In 1928, he moved to New York City. He then joined the New York School of Design. In 1929, he was inspired by Yvonne Georgi and Harald Kreutzberg to dance. Through this inspiration, he enrolled at the Humphrey Weidman School.

In 1930, Jose Limon began his career as a performer on Broadway. In the same year, he choreographed his first dance ‘Etude in D Minor.’ He later formed the group ‘The Little Group’ with Eleanor King and Ernestine Stodelle. He later appeared in the Broadway musicals ‘Americana’ and ‘As Thousands Cheer.’

He also appeared in other shows such as ‘Quest,’ ‘With My Red Fires,’ ‘Theatre Piece’ and ‘New Dance’ among others. In 1937, he became one of the Bennington Fellows. In 1939, he created his first choreographic work ‘Danzas Mexicanas’ which became popular. In 1944, he appeared as a featured dancer in the Broadway production ‘Keep Off the Grass.’

In 1941, Jose Limon started working with May O'Donnell. They choreographed pieces such as ‘Curtain Raiser’ and ‘War Lyrics.’ In 1942, he married Pauline Lawrence. Pauline was the founding member and manager of the Humphrey Weidman Company. In 1943, he dissolved his partnership with May. In the same year, he made his final appearance in Broadway in the production ‘Rosalinda.’ For the rest of the year, he created dances at the Studio Theatre.

The same year also saw him being drafted into the Army. In the army, he worked with Alex North and Frank Loesser to choreograph several works for the United States Army Special Services. In 1946, he became an American citizen and founded the Limon Dance Company. While working in the company, he came up with techniques which came to be known as the Limon technique which is famous to date. In 1949, he choreographed ‘The Moor’s Pavane.’ The choreography earned him the Dance Magazine Award for most outstanding choreography.

In 1951, Jose Limon became a choreographer at The Julliard School. He also worked at Instituto Nacional de Bellas Artes in Mexico City where he created six works. Doris Humphrey was the artistic director of the Jose Limon Dance Company. In 1958, she passed away, and Limon took up her position. In 1964, he became the creative director of the American Dance Theatre at Lincoln Centre. In 1965, he appeared in the special ‘The Dance Theatre of Jose Limon.’

In 1966, he received a grant from the National Endowment for the Arts. In the same year, he and his company were invited to perform at the White House for President Lyndon Johnson and King Hassan II of Morocco. In 1969, he appeared as a dancer for the final time in ‘The Traitor’ and ‘The Moor’s Pavane’ at the Brooklyn Academy of Music. In 1970, he was diagnosed with prostate cancer. The following year, he founded the Jose Limon Philadelphia Dance Theatre.

Jose Limon received honorary doctorates from Wesleyan University, Oberlin College, The University of North Carolina and Colby College. In 1997, he was inducted into the National Museum of Dance and Hall of Fame.