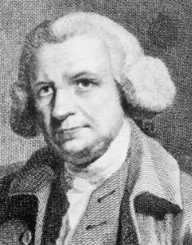 John Rennie the Elder was born on June 7, 1761, in Scotland. He had several siblings.

In 1780, about three years after John Rennie had finished his primary education, John Rennie enrolled in the University of Edinburgh. He stayed there until he completed his studies in 1783.

After finishing up his studies at the University of Edinburgh, John Rennie began working at Boulton & Watt, a manufactory company in Scotland. Here, he performed as an engineer. After working for this company for about a year, he was sent to England to work on a project for the company. He was asked to make machinery for a flour mill, which he did. One extraordinary thing he did for this project was to use metal where other engineers might have used would. This small feat would later encourage other engineers to do the same. Metal fixtures in architecture would soon become more common in part because of his work.

In 1791, John Rennie left Boulton & Watt to create his own engineering company. This business was based in England, not his home country of Scotland. His main focus was on civil engineering, which meant that he would be doing many government funded projects that would be beneficial to community members, not just private businesses.

One the of the first projects John Rennie worked on with his new company was the Lancaster Canal, which he made in 1792. Throughout the 1790’s into the 1810’s, John Rennie continued to work on public projects like this. Most of this projects were canals and other water-based things, like bridges and docks. Some of his architectural feats were even commissioned by the British Navy (mostly docks).  Some of his famous works from this time are listed below.

During his lifetime, John Rennie was a member of the Royal Society.

In 2014, John Rennie was posthumously inducted into the Scottish Engineering Hall of Fame.

John Rennie married Martha Mackintosh in 1790. The couple would later go on to have seven children together.

John Rennie died on October 4, 1821, in London, England. One contributing factor to his death was overwork. He was only 60 years old when he passed away.

Two of Rennie’s sons, George and John Rennie (the younger) were also engineers in their own right. After John Rennie the Elder’s death, these two sons took over the family business and continued to work on civil engineering with the company for most of the lives.

Many of Rennie’s structures still stand today. They make beautiful tourist attractions, as well as practical architectural pieces, that are sure to hold up for years to come.