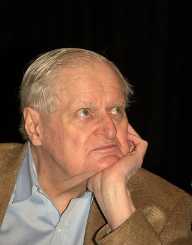 American poet John Ashbery is regarded as one of the greatest twentieth-century American poets. He was born on the 28 July 1927 in Rochester, New York to Chester Ashbery and Helen Lawrence. His father was a fruit farmer, and Ashbery spent his childhood at the family farm close to Lake Ontario. Hs mother Helen was a biology teacher. Ashbery had one sibling, a brother who died of leukaemia when he was nine years old. In an interview with the Guardian newspaper, Ashbery once said that his deceased brother who loved sports and the farm would have been a better son for his parents. He believed that his brother, had he lived, would have been straight, married and had children.

He was a clever child and once won a radio called Quiz Kids. His grandfather Henry Lawrence was a professor of physics at Rochester University, and he encouraged Ashbery to read.

Ashbery was a pupil at Deerfield Academy, Massachusetts where John Ashbery was exposed to poetry and became inspired to write his own. As well as poetry, he was also interested in painting. Ashbery had been under the impression that he had won a scholarship to the exclusive school but later found out that a neighbor had paid his school fees who sons also attended the school. After graduating from Deerfield Academy, Ashbery enrolled at Harvard.

In 1949 Ashbery graduated from Harvard College. His thesis focused on the poetry of W.H. Auden. In 1951, he received an M.A from Columbia University. In 1965, he went on a Fulbright Scholarship to France.

John Ashbery has won many prizes for poetry including the Pulitzer Prize, the National Book Award, the Yale Younger Poets Prize, the Bollingen Prize, the Ruth Lilly Poetry Prize, the Griffin International Award and a MacArthur Genius Grant.