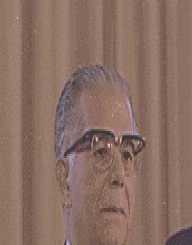 Joaquin Balaguer was a three-time President of the Dominican Republic. He was aged and with many health complications. Although it is not in many cases that old leaders with many health troubles get to lead a country, Joaquin did. He was very determined, wise and flexible. Joaquin is an exemplary Latin American Strongman. Joaquin was very stubborn and if he put his eyes on an objective, he would do everything in his power to achieve his goal. He served as the vice president for the administration of President Hector Trujillo after which he became the president.

Since when he was a youth, he was interested in politics. He looked up to the Puerto Rican political leader, Pedro Albizu. He was his mentor primarily because of his ferocious leadership abilities.

Joaquin Balaguer had attended the school of law and had also shown some attraction to writing. As Joaquin joined the area of politics, skilled and determined, he went in with a mindset of leaving a legacy for himself. Joaquin had served in many directorial and political posts. He had been the secretary of education in the Trujillo government of autocracy. When it was his time to run for the presidency, he did his campaign by amity and systematic change and all through his time in power; he struggled to fulfil his promises.

Joaquin Balaguer was born in Santiago Province of the Dominican Republic. His birth name was Joaquin Antonio Balaguer Ricardo. His father was Joaquin Balaguer Lespier, and his mother was Carmen Celia Ricardo. He had several sisters as siblings. He was of diverse lineage. From a young age, he liked literature. He even composed poems that were published in local journals. He was also interested in politics from his early days. Joaquin started being involved in the policy in his time as he served in the American Military.

He attended the University of Santo Domingo where he studied law. Additionally, he also went to the University of Paris for a short period. In his young years, he looked up to the Puerto Rican leader, Pedro Albizu for mentorship.

In 1930, Joaquin Balaguer was selected to be the attorney in the court of properties after he became a lawyer. He later became appointed as the Secretary of the Dominican Legation in Madrid In 1932. He worked there for three years.

For the following 20 years, Joaquin served in many political and directorial positions when the dictator Trujillo was in power. Some of his posts were; Undersecretary of the Presidency where he served in 1936, he was the Ambassador to Mexico from 1947 to 1949. He also became the Secretary of Education from 1949 to 55). Under President Hector Trujillo, he was the vice president.

The dictator Rafael Trujillo was murdered in 1961, and his son took after him in the wheel of autocracy. Joaquin tried all he could to have restructurings in the country leadership system through liberalisation and by use of media influence. The son and brother of the deceased General Trujillo did not agree with Joaquin’s way of thought, and hence he was required to resign from the presidency after a military overthrow in 1962. He then ran to seek a place of safety in the United States.

In 1966, Joaquin Balaguer went back to the country after the announcement of the general elections.It was an easy win for him when he vied, and he became the president yet again, re-elected for two more terms. He served as the president up until 1978.

In his second term as the president, Joaquin implemented many public reforms, and the country gained a stable economic expansion. His government saw through the construction of schools, hospitals, roads and other significant infrastructure. His critics at some point said that he too acted like an autocrat sometimes.

However, Joaquin Balaguer vied for a 4th term but lost in 1978. This was followed by another election held in 1982 of which he also lost. Joaquin was a very strong-minded man, and so he vied again in the 1986 elections. Unpredictably he won and became the president for the third time. Although at this period he was an old man with health complications.

Remarkably, he developed vital infrastructural projects which included main roads, schools, and hospitals. Under his leadership, the economy did well, and he was re-elected in 1990. By this time, he was already in his 80’s. He was nearly blind and deaf. However, his trait of unconquerable spirit in him helped him evade early death.

In the elections of 1994, Joaquin Balaguer ran as well even though he was approaching 90 years. This election, however, was flawed by propaganda, and hence fresh polls were conducted in 1996. He was not a contender in this particular election.

Joaquin Balaguer ruled as the president of the Dominican Republic for three non-consecutive terms. Before he became president, he served in other political areas of government. Joaquin was a leader who truly loved his nation and had the people’s interest at heart. He served a crucial part in running the country to a path of real democracy after the immense plague of dictatorship.

Joaquin Balaguer belongs to a large family where he was the only son. He had many sisters with whom he was very close. However, a number of his sisters died before him. He never tied the knot with anyone, and he became active in politics until his death. He passed away at the age of 95 in 2002.