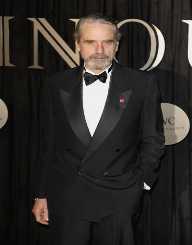 British actor Jeremy Irons was born on the Isle of Wight on the 19 September 1948. His parents were Paul Dugan and Barbara Sharpe Brymer. He has two older siblings: Christopher (b.1943) and Felicity (b.1944).

Jeremy Irons was a pupil at Sherborne School, Dorset (1962-1966) and trained to be an actor at the Bristol Old Vic Theatre School.

Early acting appearances including the role of Judas in Godspell in November 1971. The play ran for over a thousand performances. Another old character was starring in Love for Lydia (1977) an adaption of the H.E. Bates novel. Jeremy Irons also starred in Langrishe Go Down (1978), a BBC production where he played opposite Judi Dench.

Irons’s breakthrough role was playing Charles Ryder in Brideshead Revisited (1981) a highly successful television adaptation of Evelyn Waugh’s novel. His success in Brideshead Revisited was followed up by starring with Meryl Streep in The French Lieutenant’s Woman (1981) a film adaptation of the John Fowles novel of the same name. Both these productions were BAFTA nominated and secured Irons’s status as a leading man.

Irons made his debut on Broadway in The Real Thing (1984), the Tom Stoppard play. He acted in three roles for the Royal Shakespeare Company including playing Richard II at Stratford-on-Avon in 1986. He also played the role of Professor Henry Higgins in the musical My Fair Lady on the stage in London.

Jeremy Irons was briefly married to the actress Julia Hallam in 1969. In 1978 he married the Irish actress Sinead Cusack, and they have two sons. He owns a castle in Ireland as well as various other homes.

More People From Isle Of Wight