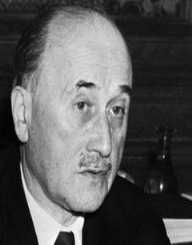 Jean Monnet was born was born on November 9, 1888, in Cognac in France. His parents were merchants in Cognac. After his high school education at age 16, Jean Monnet abandoned his university entrance exams halfway and left for the United Kingdom. Jean Monnet spent several years there in the care of Mr. Chaplin, a representative of his father’s company. Jean Monnet also embarked on several business journeys for his father in countries like Russia, Canada, Scandinavia, Egypt and back to the United States.

Prior to the World War I, Jean Monnet conceptualized that combining the war efforts of Britain and France was the only way to an Allied victory. Jean Monnet then came up with a way to synchronize the war resources. In 1914, Jean Monnet was able to convince the French government to buy into his suggestions and agree in principle after a meeting with the country’s Premier, Rene Viviani. Things did not go as planned during the first two years of the wars, as Jean Monnet was unsuccessful in pushing on for working economic cooperation of the allied. However, things changed afterward as the Wheat Executive, and the Allied Maritime Transport Council was implemented, and that improved the war efforts.

After the war, Jean Monnet served as an assistant to the French minister of commerce and industry, Etienne Clémentel. After the creation of the League of Nations in 1919, Jean Monnet was appointed the Deputy Secretary of the League by French Premier, Georges Clemenceau and British Statesman, Arthur Balfour. This was in recognition for his contributions during the war. Jean Monnet resigned from his post in 1923, as he became fed up with the difficult nature of his work there coupled with not reaching consensus during decision-making. He then returned to manage his father business, which was at the time facing some challenges. Jean Monnet left for the United States of America in 1925 to accept a partnership with the New Bank Blair & Co. The bank would later in 1929, merge with Bank of America to form Bancamerica-Blair Corporation owned by the Transamerica Corporation.

Work In Other Countries

Gaining his feet as an expert in international financing, Jean Monnet returned to international politics and used his expertise to help several central and Eastern European countries in their economic recovery. Jean Monnet helped in stabilizing the Polish zloty in 1927 and the Romanian Leu in 1928. From 1932 to 1936, Jean Monnet served as the chair of the East-West non-political committee in China for the development of the Chinese economy. Jean Monnet was charged with establishing partnerships between Chinese capital and foreign companies leading to the formation of the Chinese Development Finance Corporation (CDFC) and rejuvenating the Chinese railroads.

Jean Monnet had several other partnership connections with famous businesses and people including Wallenberg family in Sweden, Bosch family in Germany, Solvay's and Boëls in Belgium and the Rockefeller family in the United States. Jean Monnet contributed to the post-war World War II economic development of France. Jean Monnet proposed the Monnet Plan also known as the "Theory of l'Engrenage" in 1945, which was adopted by France’s Charles de Gaulle in early 1946.

Jean Monnet was also instrumental in the negotiation of the Blum-Bynes agreement with the United States that cleared the $2.8 billion debt of France in exchange for France cinemas to be opened to American movies. Jean Monnet also helped in the formation of the European Coal and Steel Community which was joined by West Germany, Belgium, Italy, Luxembourg, and Netherland during the formation stage. This partnership would later give birth to the European Union.

Jean Monnet was married to Italian Painter Silvia Giannini in 1934. The couple first met in 2929 at a dinner party. Silvia was the wife of Monnet’s employee, Francisco Giannini at the time and had to arrange for a divorce in order to marry Jean Monnet. During that period, divorce was not allowed in most European countries, so the couple had to move to Moscow for the marriage. Silvia had a daughter in her previous marriage. Jean Monnet was able to secure Soviet citizenship for Silvia, and that enabled her to divorce Giannini to marry Monnet. The couple later had a daughter, Marianne in 1941. Jean Monnet died in 1979 at age 90 in his home in Houjarray, Bazoches-sur-Guyonne.