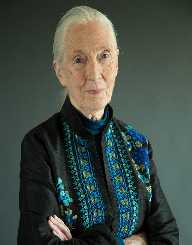 Jane Goodall is English Anthropologist who is renowned for being an animal right activist. She is best known for her 45-year study of primate behavior of Chimpanzees in Tanzania. She always fascinated with animals and their behavior right from her early years. She is always dreaming of traveling to Africa someday to observe and watch animals in their natural habitats. She has a passion for her animals, and this made her find her way to the Gombe Stream National Park in Nigeria immediately after her schooling. To her mentor, CHimpazees were the second most intelligent primate. As a result of this, she decided tokeep on observing them on a daily basis as part fo her research.

Her interaction with Chimpanzees made her challenge the so called belief as to Chimpanzees being vegetarians. She could also discard the belief that Man is the only tool maker of all the species which inhabit the earth. Jane Goodall received numerous awards as well as accolades for her work for the betterment of the society for animals. She wrote several books on how to treat animals with love and kindness. Despite her age, she still spends more than 300 days of the year traveling, raising money to preserve wildlife as well as lecturing people.

Jane Goodall was born on 3 April 1934 to Mortimer Herbert and Magaret Joseph. She was born in London into a family of a businessman as well as a novelist. Her love and curiosity about animals were kindled when she received a toy resembling a chimpanzee from his father. The curiosity then increased that he started observing nature and wildlife. Jane Goodall became fond of animals that she always dreamt of traveling to Africa one day to watch and observe animals in their natural habitats. She later left school while she was 18 to pursue her dream due to her love for wildlife.

Her career started when the Oxford University employed her as a secretary. Jane Goodall also worked with a  London-based documentary film company, all in a bid to finance her trip. Through her friends, she met a famous anthropologist as well as a paleontologist, Louis Leakey in Kenya. Louis believed that Chimpanzees was the second most intelligent primate and that good observation of them will give one some new information on evolution. He then had an opportunity to travel to Gombe Reserve National Park in Nigeria to study the Chimpanzees. This, she took with happiness. Although she had no basic scientific knowledge or degree, she was able to study the animals and made some breakthroughs on her findings.

Jane Goodall was enrolled at Cambridge University by Leakey in 1962 and was able to earn her Ph.D. degree in Ethology. In 1977, she established her institute for the protection of Chimpanzees all over the world. Till now, she is well known as an animal activist whose movement is supported by many people in the world. Jane Goodall is always ready to teach and advocate for the love and respect for animals. She is always active and ready to raise funds for her institute, Jane Goodall Institute. She is also always ready to educate people on the essence of wildlife preservation.

Numerous works are attached to Jane Goodall, but her main works are the ones done four more than four decades in Gombe Reserve National Park. There, she adopted a unique pattern of identification by naming the chimpanzees instead of the common way of numbering them. She noticed that chimpanzee could also make tools out of things. Jane Goodall also established the fact that Chimpanzees share bonds and emotions through kisses and hugs. Apart from that, they too are violent as they tend to go violent as well as killing other. She raised her voice against the use of animals for medical and laboratory research purposes and the former Advocates for Animals. She is always ready to fight for the awareness of the preservation of wildlife for the future generations.

Jane Goodall married a Dutch Wildlife photographer, Baron Van Lawick, that was sent to Gombe to shoot the project she was working on. The two had a son before they divorced in 1974 after ten years of marriage. In the same year, she married a member of Tanzanian Parliament, Derek Bryceson, who died in 1980 of cancer. She believes in a supernatural power that is greater than anyone on earth. She also dedicated her life to wildlife and nature and had been fighting for their conservation for the past 60 years.