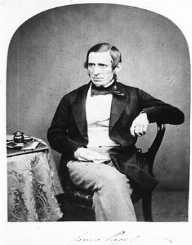 James Paget was a British surgeon and pathologist and is considered to a pioneer of modern scientific pathology.

James Paget was born in Great Yarmouth, Norfolk, England on 11 January 1814. His parents were Samuel Paget and Sarah Paget. Paget was one of seventeen children and one of nine that survived to adulthood. His father worked as a brewer, and his mother was an artist. He studied maths and ancient languages at a local school. He was aided in his studies by his mother who had been well educated. As a youth, he wished to join the navy. However, in 1830 he began training as a surgeon with Charles Costerton. He spent four years training with Costerton, the local chemist, and surgeon. He then went to further his training at St. Bartholomew’s Hospital in London.

James Paget spent two years training in which time he discovered the pathogen, trichinosis. Trichinosis is a parasitic disease caused by ringworm that infests the muscles; it is caused by eating infected pork. The discovery of the pathogen was a breakthrough in improving national health at the time. He was an able student and won many prizes during his time at the hospital. Despite only having practical training James Paget was able to pass the Royal College of Surgeons examinations and thus qualify as a practicing doctor.

James Paget remained in London working as a general practitioner. He struggled in his early years; his annual income was fifteen pounds a year. To supplement his income, he would write for medical journals. He served as curator for the hospital museum, and in 1838 he became a demonstrator of morbid anatomy at the hospital. He suffered in his career due to his lack of social standing and his struggles with his low income. He began working at the Finsbury Dispensary in 1841. He was made a surgeon and 1843 the hospital appointed him as a lecturer on physiology and general anatomy. He took up residence in the hospital and had thirty students in his stewardship. Eventually, Paget had taken on so many responsibilities at the hospital he would fail to leave its walls for weeks at a time.

In 1847, he was given a professorship by the Royal College of Surgeons. He resigned from the hospital in 1851 and began devoting himself more fully to pathology. This was difficult as his finances were constantly strained in trying to pay his father’s business debts. Regardless Paget devoted himself to his work on pathology and physiology. He would study English, French, German, Italian and Dutch texts on the subjects. Such was his knowledge of physiology that he became well known throughout England and a recognized name in Europe. His lectures at St. Bartholomew’s Hospital proved a great financial success for the hospital. However, it was in the field of pathology, a field largely in its infancy, that Paget gave his greatest contributions to medical science.

James Paget was aided by the advancements in microscopes at the time. Paget put a huge emphasis on the study of pathogens and tumors through microscopes. His early years with his private practice were difficult, but in 1858 he was made surgeon to Queen Victoria of England. He then became the surgeon to her son, Albert Edward, the Prince of Wales in 1863. This led to Paget’s practice becoming the busiest practice in London. Paget was often the point of final consultation on illnesses regarding tumors. He was one of the first to advocate for the removal of tumors rather than the limbs they afflicted. In 1871, he suffered an infection while carrying out a post-mortem. The infection was nearly fatal and was forced to give up his surgery positions to lighten his workload. However, he continued to practice as a consultant.

James Paget married Lydia North in 1844, after a seven-year engagement. Lydia’s family had strongly opposed the marriage. Together they had six children. Paget was a committed Christian and two of his sons, Francis and Luke, would go on to become bishops of Oxford and Chester respectively. Another son, Stephen, would follow in his father’s footsteps and become a surgeon. Paget died in London on 30 December 1899.

James Paget was the first to discover the worms, Trichina spiralis, that caused trichinosis in 1834. He was the first to identify and describe the bone deformity, ostetisdeformus, which was particularly impressive as he had no access to X-Ray technology. This study also led to the discovery of Paget’s disease and Paget’s Abscess. In 1875 he was elected President of the Royal College of Surgeons. He was awarded a baronetcy in 1877, making him the Baronet of Harewood Place. He was elected a member of the Royal Swedish Academy of Sciences. In 1887 James Paget was elected President of the Pathological Society.