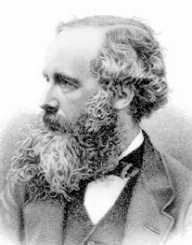 James Maxwell
Famous for his equations on which the entire classical theory of electromagnetism is based, James Maxwell was a Scottish scientist beyond excellence. In his short life, he contributed so much to the field of science that we call him the “Father of Modern Physics.”

James Maxwell united the three separate branches of electricity, magnetism, and light by demonstrating that light is an electromagnetic wave and electric & magnetic fields propagate as waves through a vacuum.

James Maxwell contributed to the Maxwell-Boltzmann distribution that finds its application in the Kinetic theory of gases. Maxwell’s findings led to the origins of the theories of Modern Physics and Quantum Mechanics.

James Maxwell also contributed significantly to the development of Mathematics & Engineering. He is widely regarded as a scientist equal, if not more to Isaac Newton & Albert Einstein. He is regularly voted to be the third greatest physicist of all time after Newton & Einstein.

James Maxwell was born on June 13, 1831, in Edinburgh, Scotland. His star sign was Gemini. His father John Clerk was a lawyer, and he was born into a wealthy family.

It was his mother Frances, who spotted the scientific talent in her son and encouraged him to follow his curiosity. Unfortunately for him, his mother died when he was eight. Maxwell himself was a weak boy physically and often remained ill.

Due to his ill health, James Maxwell often had to skip school and study at home. His father appointed a tutor who failed to satisfy young James’s questions. And so, he was enrolled in the Edinburgh Academy. School life didn’t suit Maxwell well enough, as his curiosity was often shot down by the teachers and laughed at by other kids. He remained unaffected by the mocking, however, and made two lifelong friends Lewis Campbell & Peter Guthrie.

Maxwell’s first scientific paper titled ‘Oval Curves’ was presented at the age of 14. He was helped by the University Professor James Forbes, as he was too young to present the paper himself.

By the time he turned sixteen, James Maxwell had enough knowledge to leave the academy and join the Edinburgh University to further his education. At the University, he met and studied under some great teachers including William Hamilton, John Forbes and Phillip Kelland.

Here too, much of James Maxwell's learning came from his experiments as he found the University work to be mundane and not too demanding. He carried out several experiments and published many scientific papers. By the time he moved to the University of Cambridge, he was already an accomplished mathematician.

James Maxwell left Cambridge in the year 1856 after completing his education. He took up a position as a professor at the Marischal College, Aberdeen at only 25 years of age. At Marischal, Maxwell focused on a problem that had puzzled many scientists – the secret of Saturn’s rings.

After two years of detailed study, he concluded that the rings are made of particles that independently orbit the Saturn. He presented his solution with such mathematical rigor that he was awarded the £130 Adams prize. A century later, the 1980 Voyager confirmed Maxwell’s claim.

James Maxwell moved from Marischal to the King’s college in 1960. Around this time he also succeeded in developing the first stable color photograph.

James Maxwell spent the best years of his scientific life at the King’s College. His paper ‘On Physical Lines of Force’ was published in 1861.

James Maxwell then extensively worked on the electromagnetic theory and also published his work on the heat in the book ‘The Theory of Heat.’

James Maxwell resigned from King’s college in 1865.  Six years later he became the director of the Cavendish Laboratory where he conducted many of his experiments.

James Maxwell formulated his thermodynamic equations at this time, and also made significant contributions to the Maxwell Boltzmann equation. He helped give Cavendish’s research his its final form.

James Maxwell won the Adams prize for his work on the Saturn rings. He also received the Rumford medal for his technique of making colored photographs stable.

In 1858, James Maxwell married Katherine Mary Dewar. She was very dedicated to her husband as was Maxwell to her. She also supported him in his experiments. They didn’t produce a child, however.

At the age of 48, James Maxwell was diagnosed with abdominal cancer in its final stages. Cancer took his life on November 5, 1979.

His mother had died of cancer forty years ago. James Maxwell had much science left in him which humanity would’ve benefited from, had James Maxwell lived longer.