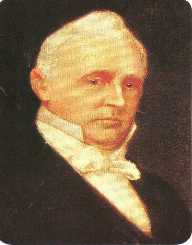 James Buchanan was the 15th Elected President of America and a lifelong bachelor. Buchanan is also the only elected president who is a resident of Pennsylvania. He is also the last president born during the late 18th century. During his term as president, he earned the moniker "doughface" and is considered by historians as one of the worst presidents to have ever served at the High Office.

Before his presidency, Franklin Pierce also appointed him as the ambassador to England of which he served from 1853 to 1856. Buchanan also served as a senator for a decade and as Secretary of the State under President James K. Poll's administration.

James Buchanan died of respiratory failure at his residence in Lancaster, Pennsylvania at the age of 78 on June 1, 1868.

The Mark of the Well-Established

Born on April 23, 1971, at Cove Gap, Pennsylvania, James Buchanan Jr. is the second eldest of James and Elizabeth Buchanan's eleven children. Growing up, Buchanan was granted education thanks to his affluent background. His father was a well-off merchant while his mother is well-educated, a guaranteed proof as means of his educational attainment.

James Buchanan attended Old Stone Academy for his early education and went to Dickinson College after graduation. With a growing affinity to the subject of law, he decided to enroll at Lancaster to pursue law studies and subsequently in 1812, was admitted to the bar.

Although famed as a bachelor throughout his life as president, he was formerly engaged to a woman named Ann Caroline Coleman. The two were engaged in 1819 but had a rocky relationship. In the course of their engagement, James Buchanan had been continuously rumored to be courting other women which led to Coleman breaking off their engagement.

Upon their separation, Coleman died suddenly, and her family blamed Buchanan for the event. He was not allowed in her funeral leaving the young Buchanan in grief. As a result, James Buchanan vowed never to marry which he carried on throughout his life. When he was elected as President, his niece, Harriet Lane took on the role as the First Lady of the United States.

A Step toward Politics

His skills as a diplomat were showcased later on when he was selected as the American ambassador to Russia by then-president Andrew Jackson.

He ran for presidential elections twice: the first one in 1852 wherein he Franklin Pierce was elected as president and the second one in 1856 where he successfully assumed the seat at the Highest Office.

Signs of a Ranging War on the Horizon

When James Buchanan was elected as president, he delivered a controversial speech on his inauguration that the issue of slavery is for the states and territories to decide. The government has no say in regards to that matter. This, in turn, earned him the nickname “doughface.”

At the same time, the northerners and southerners growing tension were reaching its peak that nearly broke the Union apart. Near the end of his term as president, the United States was on the brink of separation, and a lot of states were already on the verge of secession.

When his successor, Abraham Lincoln, took the seat at the high office, the Civil War officially broke out. A significant number of people have blamed his mishandling of the event that led to the Civil War. In return, James Buchanan wrote and published a book in 1866 accusing the Republicans and the abolitionists of the impending war. The memoir was ignored, and James Buchanan chose to withdraw into seclusion until his final days.