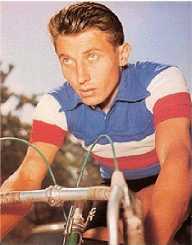 Jacques Anquetil was a road racing cyclist from France born on January 8th, 1934. He was a five times winner of Tour de France. He, therefore, made history as the pioneer cyclist ever to win the prize such number of times. The first time was in 1957 and later consecutively from 1961 to 1964. He also earned the title Monsieur Chrono during his career. His first experience with a bicycle was at the age of four. He would ride about 1½ km around his village. Little did he know that a successful career in cycling had just kicked off.  In 1950 he acquired his racing license. He was seventeen at the time.

Jacques Anquetil was born on January 8th, 1934. His place of birth was in Seine-Maritime in France. He was the son of Marie Anquetil and her husband, Ernest Anquetil. His father earned a living as a builder. He worked in Mount-Saint-Aignan located in Normandy, France. He had a brother known as Philippe. The family relocated to Boisguillaume where earned a living through strawberry farming. His father found himself jobless in 1941 and decided to do farming along with his family members.

Jacques Anquetil studied metal-turning at a technical college situated in Sotteville-lès-Rouen.  He later acquired a racing license in December 1950. He also attained qualified in light engineering. He then joined a factory in Sotteville here he only served for a while.

Jacques Anquetil began his career in cycling as an amateur cyclist. He was a fast learner hence didn’t take long to be a skilled cyclist. He won in some tournaments including the Rouen’s ‘Prix Maurice Latour. The tournament took place in May of 1951. Later in 1952, he earned the title of French national amateur road championship.  He also earned a bronze medal in the same year for the 100km team road race.

He won the Grand Prix de Lugano in 1953 and seven other times later. The second time was in 1954. This was followed by four consecutive times from 1958 till 1961. The 6th time was in 1965 then 1966. In the Grand Prix des Nations, he won eight times. He was later inducted into the two years mandatory services at the military from 1954.

In 1961, he won the Super Prestige Pernod International. He won the race three other times setting a new record. Eddy Merckx later beat his record from 1969 when he won 7 times consecutively. Meanwhile, Jacques won other races including Giro d'Italia. He won the race in 1960 then later in 1964. In 1966 he also won the Liège–Bastogne–Liège’.

Jacques Anquetil tied the knot with Janine Boeda in December 1958. She had two children from her previous marriage to a doctor. The couple attempted to have kids of their own, but Janine’s pregnancies were unsuccessful.  Annie, therefore, acted as their surrogate mother and bore them their daughter Sophie.

Jacques Anquetil later had an affair with the wife of Alain his step-son, Dominique. She became pregnant with him. His wife Janine divorced him.

Jacques Anquetil died on November 18th, 1987 at the age of 53 following stomach cancer. His death occurred in Rouen, Seine-Maritime in France. He was laid to rest in Quincampoix village in France.