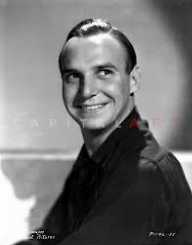 Jackie Leslie Coogan was an American actor. While he is known for his role in The Addams Family, he inspired a children's financial protection law.

Jackie Coogan was born on October 26, 1914, in Los Angeles, California. His name at birth was John Leslie Coogan. His father, Jack Coogan, Sr. was a vaudeville dancer and his mother, Lillian Coogan, was also familiar to acting.

He and his family toured while he was young and included him in his acts. Coogan had a younger brother, Robert, who also is an actor. When Coogan's father died in 1935, his mother married business manager Arther Bernstein.

Jackie Coogan started his career in acting very early. He had experience in film and vaudeville acts while he was still a baby. He got his big break when he was discovered by Charlie Chaplin. At the age of seven, Coogan was dancing with Chaplin in the 1921 silent movie The Kid. It was one of Chaplin's top-grossing films.

With acting experience under his belt, Coogan became a sought-after child actor. He was in silent movie hits including Peck's Bad Boy and Oliver Twist. He was one of the highest paid actors in Hollywood when Daddy was released in 1923. As he got older, there was less demand for him. In his teens, he starred in the 1930 film Tom Sawyer and the 1931 film Huckleberry Finn.

After Coogan's father's death, his mother and stepfather refused to give him the money he earned in the 1920s. When Jackie Coogan filed suit to get the $4 millions he earned, the courts denied him because children did not have the right to the money they made at that time.

Jackie Coogan was only given $126,000 in 1939. This spurred the California Legislature to pass the Child Actors Bill, or the Coogan Act, as it was also called. This helped future young actors and actresses by putting a portion of their earnings in a protected trust fund.

Coogan enlisted in the U.S. Army where he served as a pilot in the China-Burma-India sector. He still struggled with money, especially after never getting his salary from his early working years. He had small roles in a film, guest appearances on TV, or one-night performances including leading a 17-piece orchestra. It wasn't until 1964 when he came to his next big gig, The Addams Family. He played the outlandish Uncle Fester.

Jackie Coogan continued working even after The Addams Family was canceled. From guest appearances on TV series to lending his voice to an animated version of The Addams Family, Coogan took on numerous roles with over a hundred acting credits to his name.

Jackie Coogan is known to television viewers best as Uncle Fester, but he was also the inspiration for The Coogan Act so that other children who gain income could claim their earnings. Today there are Coogan accounts for child actors, athletes, or any other type of performer that earns their own money.

Jackie Coogan earned a star on the Hollywood Walk of Fame in 1960.

When Jackie Coogan was 21, he sued his mother and stepfather for his earnings as a child star.  He was denied the estimated $4 million and only received a small sum. He helped the California Legislature to establish the Child Actors Bill which became a law that is in effect across the land and even Canada.