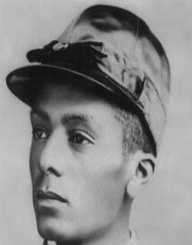 Isaac Burns Murphy was born on April 16, 1861. He was an African American jockey. He is to date considered as one of the greatest jockeys in American history. He had a unique way of urging the horse he was riding to win the race. Isaac did not use the whip to push a racing horse, but he used words and spurs plus different gestures that the horse he was riding would understand. He is famous to many because he won a total of three Kentucky Derbies. He died on February 12, 1896, at the age of thirty five.

Issac Burns Murphy was born on April 16, 1861, in Clark County in Kentucky in the United States of America. He was born to Green Murphy and his wife. In1873, his mother introduced him to a black horse trainer who trained him to be a jockey. His small size intrigued the horse trainer that he invested a lot in Isaac. When he was fourteen years old, he became a jockey. Much of his early life is not recorded because facts cannot be confirmed from what is already out there.

In 1884, he won the Kentucky Derby, the Kentucky Oaks, and Clark Handicap. This thread of victories made him the only jockey to have won all of them in a single year. In 1955, he was posthumously inducted into the National Museum of Racing and Hall of Fame.

Later on in his life, Isaac Burns Murphy started gaining weight which forced him to change his diet and this lead to the deterioration of his health.

Isaac Burns Murphy burns died on February 12, 1896, in Lexington in Kentucky of heart failure. He died at the age of thirty five. In 1967, his remains were reinterred at the old Man O’ Way burial site. In 1995, the Isaac Murphy Award was introduced to be given to any jockey with the highest winning percentage.