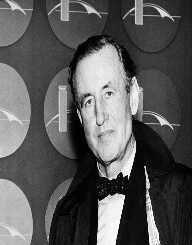 Ian Lancaster Fleming was a journalist, author and an officer of the naval intelligence. He is famous for authoring the spy novels for ‘James Bond.’ These novels became an instant sensation and were later adapted into films. He has also written a couple of books for instance ‘chitty chitty bang’ which was a book for children. He wrote this book for his son Casper’s entertainment. Fleming’s books have been filmed more than twenty-six times, with seven different actors.

Ian Fleming also worked at Family bank for a short period before joining the British Naval Intelligence. He worked tirelessly and excelled greatly. Ian became a lieutenant and later a commander. Fleming however retired after the war and took to writing entirely. He came up with the famous character, ‘James Bond’ in his novel, ‘Casino Royale’.

Ian Fleming was born on May 28, 1908, in Mayfair, England. He was born into a powerful, wealthy family. He was the son of Valentine Fleming and Evelyn St Croix Rose. His dad Valentine was the Henley Member of Parliament since 1910 and was also part of the World War I army. When he was young, he lived with his family for a short period in Oxfordshire.

Ian had three siblings; an older brother, Peter and two other brothers Richard and Michael Fleming. He also had a step-sister, Amaryllis Fleming, who was born in 1925 and was the daughter of Augustus John. Fleming studied at  Dunford School for his elementary. However, he did not like his stay there since the food was horrible and he was also being bullied. Fleming then joined Eton College, one of the best schools in England. At Eton, he did well in athletics and was the best for two consecutive years.

Later on, he was admitted to Royal Military College in Sandhurst; this was an exclusive military academy. He, however, spent a very short time there without being commissioned, this was after he contracted gonorrhea. He joined the Tennerhof, Austria in 1927, a private school governed by Ernan Forbes Dennis, a former spy for the British and his wife who was a novelist, Phyllis Bottome. Fleming also studied at the University of Geneva and that of Munich.

Ian Fleming tried out writing while he was still a student at Kitzbuhel in Austria. Earlier on, he had failed to secure a chance with the Foreign Service since he did not meet the requirements. Ian then joined Reuter’s news agency as a journalist. He stayed with Reuters for two years. He proved to be a good journalist and received positive remarks.

In 1939, Fleming was taken in by Rear Admiral John Godfrey, a Naval Intelligence director, to be his assistant. He did a great job at this, and Godfrey was overwhelmed. Fleming became part of the organisation entirely in 1939. However, he didn’t have any qualifications for the role he played. In July 1939, he was commissioned at first as a lieutenant but was later promoted to the commander after some time.

Fleming and Godfrey reached out to a professor at Oxford University in 1940, concerning preparations of geographical reports of the countries that would be involved in the military operations. In 1941, they both went to the USA to help in putting down a blueprint which was to be used by the Office of the Coordinator of Information. This department is currently known as the CIA.

His major work was when he covered the British Metropolitan-Vickers engineers’ trial. However, Fleming had to end his employment at Reuters to pursue banking. He hence took finance at the family bank.

Ian Fleming joined the British naval intelligence during World War II. He was involved in spying and planning. This position gave him an upper hand which most likely he used in writing the Casino Royale’. He travelled a lot, taking care of information regarding intelligence. He was also commissioned as the lieutenant in 1939 and later rose to be commander of the British Naval Intelligence.

Ian Fleming’s major work was writing Casino Royale in 1952. This novel received critical acclaim. It was not only well written but also made into a film. The demand was high, and they made three prints.

It was not an overnight success though. Fleming put information acquired from both journalism and intelligence together and came up with such a well-written book. ‘Casino Royal’s’ success pushed him to write another novel, ‘Live and let die’ which was released in 1954.

Ian Fleming does not have many notable awards to his name. The Danish Frihedsmedalje’ was given to him in recognition of his role in helping Danish officers escape to Britain.

Ian Fleming had many affairs with different women. In 1931, he was in a relationship with Monique Panhard. They got engaged in the same year, but Fleming’s mother broke the marriage. In 1939, he was involved with Ann O’Neill, the wife of the third baron of that time. When her husband died in the war, she got married to Viscount Rothermore who later divorced her after learning of her relationship with Ian Fleming.

In 1952, Ian married her, and they had a son, Casper Fleming. This marriage was however not perfect as they both had other affairs out of wedlock. Ian Fleming was also an alcoholic and great smoker which contributed a great deal to his several heart attacks.

In 1942, he decided to live on an island in Jamaica after an intelligence summit. The war was also over at this time. In 1945, he found a piece of land in Saint Mary Parish where he built a house and named it Goldeye. It was at this home where he wrote most of his novels.

During this time, he travelled a lot and wrote a number of his award-winning novels. Ian sold a record of thirty million additional copies of his books. His book, ‘The Man with the Golden Gun’ was published after his death.

Fleming suffered a series of heart attacks which were mostly as a result of his smoking addiction. He succumbed to one severe heart attack while at Royal St George’s Golf Club on 11 August 1964. Ian collapsed after having dinner with his friends. His last words were when he apologised to the ambulance team for the inconvenience he had caused them. He was laid to rest in a village in Sevenhampton.