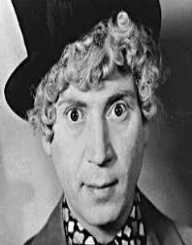 Adolph Marx was born 23rd November 1888, to Sam and Minnie Marx. He was born in Manhattan, New York City, in the United States. Marx was one of five brothers.

He left school at age eight, and he started working with his brother, Chico. The two brothers contributed to the household income through their odd jobs.

At the beginning of 1910, Marx began his stage career. He formed a Vaudeville act with two of his brothers, Julius (Groucho) and Milton (Gummo). Within a short time, he gained his stage name of ‘Harpo,' due to him playing the harp.

In 1911, Marx also changed his first name from Adolph to Arthur, as he had never liked his name.

In 1921, Arthur "Harpo" Marx made his movie debut in Humor Risk. His brothers also appeared in the movie with him. The film screened once and then became lost.

The brothers starred together again The Cocoanuts, released in 1929.

Harpo Marx created a persona that never spoke. Throughout his whole career, he acted silently. He accompanied his silent acting with a curly wig. The hair appeared to be blonde on screen, although it was pink or red. This was due to the black and white filming.

The U.S. recognized the Soviet Union in 1933. Harpo Marx then traveled to Moscow and performed for six weeks. His tour was hugely successful.

Marx also became a courier for secret documents when he returned to America. The US Ambassador based in the Soviet Union gave an envelope to Marx, which he taped to his leg. Marx successfully delivered it when he was back in the U.S.

In 1952, Harpo Marx debuted on television in The Ezio Pinza Show. He appeared in just over a dozen shows during the next ten years, one of which was I Love Lucy.

Groucho received an honorary Academy Award in 1974, on behalf of his brothers. Marx had passed away, but Groucho mentioned both Harpo and Chico in the speech.

In 2002, the Walk of Stars in Palm Springs, California, dedicated a star to Marx.

In 1936, Harpo Marx married Susan Fleming, an actress. The couple adopted four children, and they were still together at the time of Marx's death.

Marx died on 28th September 1964, one day after he had heart surgery.

Marx and his brothers were one of the most famous acts for their time. This includes both on the Vaudeville stage and in movies and television.