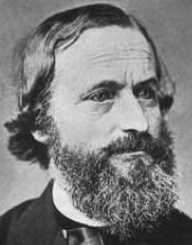 Gustav  Kirchhoff was a German physicist who contributed immensely to the field of thermochemistry and electrochemistry. Born on March 12, 1824, his works created a fundamental understanding of the emission of black-body radiation, electrical circuits, and spectroscopy. Gustav Kirchhoff also instrumental in the use of mathematics to study physics.

Gustav Kirchhoff was the originator of the term “blackbody” radiation in 1862, and formulated two other concepts in spectroscopy and circuit theory and bears the name of the Kirchhoff’s laws and the Kirchhoff's Law in thermochemistry. The awards scheme, Bunsen-Kirchhoff Award for spectroscopy was named after him and Robert Bunsen.

In 1845, during his education at Albertus University, he the circuit laws, which became the Gustav Kirchhoff Laws and are now universally accepted in electrical engineering. This became his doctoral dissertation, after completing the study as a seminar exercise. Gustav Kirchhoff postulated in 1857 that, an electric signal in a resistance less wire travels with the speed of light along the wire. In 1859, Gustav Kirchhoff proposed his law of thermal radiation and backed it with adequate proof two years later.

In 1854, Gustav Kirchhoff received an invitation from the University of Heidelberg, where Gustav Kirchhoff worked with Robert Bunsen on spectroscopic. Their work resulted in the discoveries of caesium and rubidium in 1861. Working with the model of Neumann, Gustav Kirchhoff along with mathematician Leo Koenigs berge rstarted a mathematical-physical seminar while at Heidelberg. Gustav Kirchhoff also made contributions to optics by solving Maxwell’ equation, hence provided a solid foundation for Huygen’s principle.

Gustav Kirchhoff contributed immensely to the study of spectroscopy and through that formulated three laws, which described the light emitted by incandescent objects, thespectralcomposition of light and improved on the discoveries of Anders Jonas Angstrom and David Alter. His three laws are;

During this period, Gustav Kirchhoff was not aware of the existence of energy levels in atoms. It took Bohr model of the atom to explain the existence of discrete spectral lines, and that led to quantum mechanics.

Gustav Kirchhoff was married to Clara Richelot in 1857. Clara was the daughter of Richelot, his mathematics professor. They had five children. After Clara died in 1869, he married Luise Brommel in 1872. Gustav Kirchhoff died in 1887 and was interred in the St Matthaus Kirchhof Cemetery in Schoneberg, Berlin.

Gustav Kirchhoff received the Rumford Medal in 1862, for his work on the fixed lines of the solar spectrum, and on the inversion of the bright lines in the spectra of artificial light. Gustav Kirchhoff was elected as a foreign member of the Royal Netherlands Academy of Arts and Sciences in 1884.