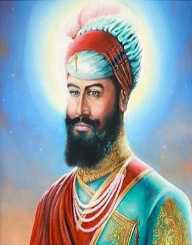 Guru Hargobind was born in July 5, 1595.  He was the sixth of the Sikh Gurus. He was also the first to engage in warfare. He is famous for having organized the first Sikh army. He was always ready to fight the Mughal forces since the Mughal emperor Jahangir had executed his father, Guru Arjan Dev.

Guru Hargobind was born on July 5, 1595, in Guru Ki Wadali, Punjab in India. He was born to Arjan Dev and Mata Ganga as their only son. Arjan Dev was the fifth Guru of the Sikhs. In 1606, his father was killed by Mughal Emperor Jahangir. He was appointed as the guru after his father’s death. His father advised him to come up with an army which was fully trained in martial arts so as to be ready to fight against the Mughal forces.

In 1606, his succession ceremony took place, and he asked Baba Buddha to adorn him with a sword and not the Seli of Guru Nanak Dev which had been used by gurus who came before him. Guru Hargobind was adorned with two swords, one he put on the right and the other on the left. The swords represented temporal and spiritual power. He encouraged physical and military training of the Sikhs. He also trained and became a good wrestler, Swordsman, and rider. The Sikhs were peaceful, but after Arjan Dev was tortured and executed, they decided to take up military action in order to challenge Islamic prosecution conducted by Mughal Emperor Jahangir.

Hargobind built an army of strong young men and acquired hundreds of horsemen. He also acquired sixty gunners and five hundred men from the Majha area of Punjab. He built forts known as Amritsar and Lohgarh in order to fortify his cities. He taught his men how to fight against evil to protect their rights. The Mughals viewed the Sikhs as a threat since they had grown well in military action. Jahangir later had the guru arrested and jailed for several years. In 1612, he released him and fifty two rajas who were arrested for opposing Jahangir's rule.

In 1627, Jahangir died, and he was succeeded by Shah Jahan who began persecuting Sikhs. Guru Hargobind was not impressed, and so he organized his army and fought the Mughals in battles in Kartarpur and Amritsar among other places. The Sikh army defeated the Mughals in several battles including the fierce battle of Amritsar in 1634. With his reign, the Sikh community grew in numbers and as a separate entity within the empire. He earned the title of Sacha Padshah (True Emperor) due to his great leadership.

Hargobind was married thrice to Mata Nanaki, Mata Mahadevi and Mata Damodari with whom he had many children. He died on March 19, 1644, at the age of forty-eight. He was succeeded by his grandson Har Rai. He was the founder of the city of Kitarpur. He also built the Akal Takht which is among the five seats of power of the Sikhs.