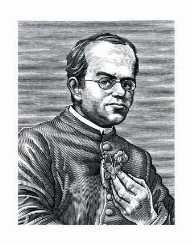 Gregor Mendel Johann was born on July 20, 1822. He was a scientist and abbot of St. Thomas Abbey in Brno, Margraviate of Moravia. He is popularly known as the founder of modern genetics and science. Through his experiments with a pea plant, he came up with the rules of heredity which are currently known as the laws of Mendelian Inheritance. He died on January 6, 1884, in Austria Hungary at the age of sixty one.

Gregor Mendel Johann was born on July 20, 1822, in Silesia in the Austrian Empire now known as the Czech Republic. He was born into a German speaking family. He was born to Rosine and Anton Mendel. He was brought up alongside two sisters, Theresia and Veronika. His family lived on a farm which had been owned by the Mendel family for over one hundred years. When he was young, he studied beekeeping while at the same time working as a gardener.

He attended the gymnasium in Opava, but he was in and out of the institution due to illness. In 1840, he joined the Philosophical Institute of the University of Olomouc where he studied practical and theoretical philosophy and physics. He, however, faced financial issues with his studies but he managed with the help of his sister Theresia.

Gregor Mendel later joined the Augustinian Friars and was given the name Gregor. He then joined the Faculty of Philosophy where the Department of Natural History and Agriculture was headed by Johann Karl Nestler. Johann did numerous researches on hereditary traits of plants and animals, and Gregor also got interested in the science of genetics and started his research.

Gregor later joined the Augustinian St. Thomas’s Abbey in Brno where he started training as a priest. He joined the institution with the help of his physics teacher, Friedrich Franz. He later worked as a substitute high school teacher. In 1851, he joined the University of Vienna with the sponsorship of Abbot C.F. Napp. He entered the university to gain a more formal education.

In 1853, he returned to Abbey and became a teacher in physics, but he did not become a certified teacher since he kept on failing his oral exams. In 1867, he became abbot of the monastery.

Gregor Mendel is known as the father of modern genetics since he studied variation in plants. In 1856, he started conducting genetic experiments of the pea plant after he was given a 2 hectares land to do his research at the monastery. In 1865, he presented his paper ‘Experiments on Plant Hybridization’ at the Natural History Society of Brno, Moravia. The paper was published the following year due to the popularity that it had gained.

He later did experiments on mice, honeybees, and hawkweed. He studied astronomy and meteorology which led to him founding the Austrian Meteorological Society in 1865.

Gregor Mendel died on January 6, 1884, in Brno, Moravia in Austria Hungary currently known as the Czech Republic. He died at the age of sixty one.