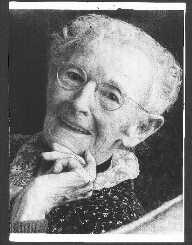 Grandma Moses was also known as Anna Mary Robertson was an American painter born on September 7th, 1860. She became widely renowned during her time for her nostalgic paintings. She used her paintings to depict the life of rural Americans. The talented folk artist began her career when she was 78 and became quite an inspiration to many. Though her success began late in her life, she still left a legacy. Individuals have learned from her experience that it is never too late to start something you have always dreamt of doing. Within the 30 years of her career, Grandma Moses produced over 1600 canvasses. For her good work, President Harry S. Truman honored her with the Women's National Press Club Trophy.

Grandma Moses was born on September 7th, 1860. Her place of birth was in Greenwich, New York in the United States. She was the third child born to Russell King Robertson a farmer and Margaret Shanahan Robertson. Grandma Moses had five brothers and four sisters.

Growing up, Grandma Moses used grape juice and lemon to paint her first paintings. Also, she used other natural materials like flour paste, sawdust, grass, ground ochre to create her work. She left home when she was 12 years old to work on the farm of a wealthy family living nearby. For the next fifteen years of her life, she earned a living working for wealthy families. Some of her chores included: sewing, cooking, and housekeeping.

27 years old Grandma Moses met Thomas Salmon Moses at the same farm she was working in. They wedded and continued working in local farms in Staunton, Virginia. The couple was blessed with ten children, but only five survived infancy. They lived in Shenandoah Valley before settling in Eagle Bridge, New York in 1905. Sadly, Thomas died in 1927 from a heart attack and the widowed Grandma Moses never married again. Their son Forrest took over the role of his father and became the manager of their farms.

In the mid-1930s, Grandma Moses decided to focus her attention on her painting talent. Even though she was in her seventies at the time, the great painter still chose to pursue her dream. The year 1938 marked the beginning of a successful career of Grandma Moses. She displayed her artistic work at a local store and caught the eye of Louis J. Caldor, an art collector who purchased them all.

In 1939, she exhibited her work at the Museum of Modern Art situated in New York. The following year, she also displayed her paintings at the famous department store in New York, Gimbels. In her paintings, she depicted the rural life of An American life based on her own experiences. Among her famous work include the 1947 “Applebutter Making,” and “Joy Ride” in 1953 and the 1959 “Pumpkins.”

Grandma Moses breathed her last on December 13th, 1961. This occurred in Health Center in Hoosick Falls. She was 101 years old at the time and was laid to rest in the Maple Grove Cemetery.