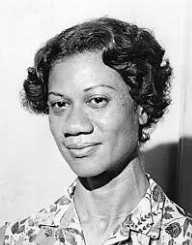 Gloria Richardson was born on May 6, 1922. She is an African American Civil Rights activist. She is renowned for being the leader of the Cambridge movement. She is currently Ninety six years old.

Gloria Richardson was born on May 6, 1922, in Baltimore, Maryland. She was born to John and Mable Hayes. She was one of the St. Clair family. In 1942, she graduated with a bachelor in Sociology from Howard University. While in college she started picketing a segregated Washington DC Woolworth Store. She was neglected of being a leader because she was Black as well as a female. She later focused in public works.

In 1961, Gloria Richardson's daughter was involved in the Student Nonviolent Coordinating Committee member. In 1962, Richardson was selected to become the organizer and spokesperson of the adult led affiliate Cambridge Nonviolent Action Committee. This body was focusing on the African American Communities well being. They later started by focusing on voter registration which in turn targeted the removal of state senator Fredrick Malkus. The Cambridge movements focused on African Americans who were experiencing unemployment as well as low wages to enhance Economic equality.

In 1963, the movement led to a major riot following the attack of six black and white protesters on Dizzyland by white guards. National Guard’s General, Gelston gave himself priority of governing the town hence putting up new governing rules such as; a ban on firearms, closure of shops at 2 pm instead of 9 pm, curfew at 9 pm instead of 10 pm. This was followed by a stage walk of 250 African Americans to the Dorchester courthouse before being attacked by almost 200 white people.

There were gunfights between African Americans and the white people who were brought in carloads. John F, Kennedy later ordered the locals to stop the riot. After some time, Robert F. Kennedy alongside the then housing officials proposed the Treaty of Cambridge which was later signed in by the Attorney General based in Washington D.C, State of Maryland, Cambridge officials and the local back leadership which included Gloria Richardson. In 1963, blacks started being treated equally amongst the whites. Richardson was later identified as Negro Woman Freedom Fighter.

In 1964, Gloria Richardson again led a protest aiming the removal of George C. Wallace who was a segregationist. Later that year, the then president Johnson signed the Civil Rights act hence the withdrawal of George C. Wallace. She later retired from public life to continue with her works. She later left Cambridge. She worked with the New York Department for the Aging, Harlem Youth Opportunities Unlimited, and Association Community Teams.

In 1964, Gloria Richardson got married to Frank Dandridge. She is currently Ninety Six years old.