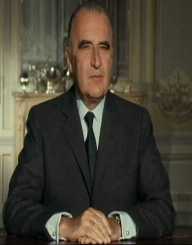 Georges Jean Raymond Pompidou ALIAS Georges Pompidou was born on July 5th, 1911. Pompidou followed his parents’ footsteps by becoming a teacher later in his life. In 1939, he was called in to fight for his nation in World War II. Eight years later, he left the infantry regiment army. He quickly switched back to a career that he had been used to, teaching.

In 1944, Pompidou met with the President of the provisional government. He was called Charles de Gaulle. It is from here that he was chosen to serve as his advisor more so on education and economics. Soon, Pompidou rose to become a trusted advisor to the provisional president. He was part of his staff for the next two years before de Gaulle resigned.

In 1958, de Gaulle was back to power. He chose Pompidou to serve as his main personal assistant. He worked in this post until early 1959 where he returned to his job at the bank following resignation of 6 months that he had earlier left. After his return, he was promoted to the position of a general director.

It did not take time before Georges Pompidou came in to help de Gaulle in negotiations that would help bring an end to Algerian War of Independence. He was successful in this mission as he brought about a ceasefire between the French troops and the Algerian guerrillas in Algeria. De Gaulle later appointed Pompidou to serve as the prime minister in April 1962.

At the time of his appointment to serve as the prime minister, Georges Pompidou was not a famous individual in the public eye. Nonetheless, he showed his leadership skills on several occasions. For example, he was instrumental in making sure that worker and student strikes in 1968 came to an end. He was the individual in charge of negotiations between employees and employers which later brought about Grenelle agreements thus ending strikes.

Regardless of the success, he gained in his tenure as a prime minister, Georges was soon replaced in 1968. Partly, this was as a result of the strenuous relationship he had with de Gaulle. They conflicted over their different opinions.

After his replacement as a prime minister, Georges Pompidou announced that he would be running for the presidency in the 1969 elections. He won the elections and was elected to the president’s post on June 15th, 1969. His policies were different from de Gaulle’s.

In 1973, he aided the U.K. in uniting with the European Community. This was a proposition that de Gaulle had strongly opposed. In addition to bringing U.K. to the European Community, he was also instrumental in ensuring that France had friendly ties with the U.S. and North Atlantic Treaty Organization. His efforts saw France grow economically over the period that he served as the president.

In 1935, Georges Pompidou got married to Claude Cahour. Together they had a son, Alain. Cahour remained with Pompidou until the time of his death.

On April 2nd, 1974, Georges Pompidou died. He had been diagnosed with bone marrow cancer earlier on, but he never made his health condition public. Therefore, he did not resign from office. His sudden death thus was a huge surprise to the entire nation. He died at the age of 62.