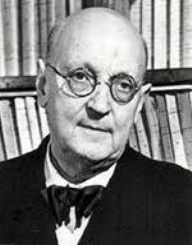 Georges Duhamel was a French writer and doctor.

Denis Thevenin was born on June 30, 1884, in the 13th arrondissement of Paris, France. He came from a poor struggling family with four kids. His father constantly changed his job, so his mother was forced to work as a seamstress to support the family. When he got older, he changed his name from Denis Thevenin to Georges Duhamel.

Georges Duhamel decided to become a doctor, earning his degree in 1908. After that, he preferred to focus on writing rather than medicine. During World War I, he served as an army surgeon in various places around Europe.

In 1906, Duhamel co-founded an artistic community called the Abbaye Group. The community was a popular gathering spot for writers, painters, and musicians. He soon released two collections of poems, titled Legends, Battles, and Man in Mind. He followed up with two more collections, titled According to My Law and Companions. During this time, he also wrote the plays The Light, In the Shadow of the Statues, and The Fight.

In 1912, he became the editor of the literary magazine Mercury. He wrote about his experiences in World War I in the novels Civilization and The Life of the Martyrs. Civilization won the Goncourt Prize in 1918. After that, he wrote several more plays, including The Cockroach, The Work of Athletes, and When You Want. He then published several collections of poetry, titled Elegies, French Anthology, and Voices from the Old World.

Duhamel followed up with the works Fables from My Garden, White War Memorial, Place of Asylum, and French Positions. In 1944, he published Chronicle of the Bitter Seasons, Comforting Music, Doctor’s Words, Inventory of the Abyss, and Biography of My Ghosts.

He then released The Weighing of Souls, Wind Sowing, and The Time of Research. The last two works he published were The Voyage of Patrice and Hopes and Trials. After that, he traveled around France and gave pacifist speeches.