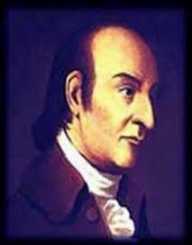 George Wythe was an American colonist, lawyer, scholar and one of the signatories of the American Declaration Of Independence.

George Wythe was born to Thomas Wythe III and Margaret Walker in 1726 in Chesterville Virginia. His family was plantation farmers who had lived on the farm for generations. In 1729 his father died. Wythe grew up under his mother’s care. He went to a local grammar school in Williamsburg. He learned the classical languages Greek and Latin from his mother. Wythe grew up under strict Quaker tenets. He learned good Christian values instilled in him by his mother.

After his grammar school, George Wythe studied law at his uncle’s office at 16. His uncle Stephen Dewey had a respected law firm in Virginia. He graduated from his informal tutelage at his uncle’s office. In 1746 Wythe registered and sat for his bar admission exams. He passed and was admitted to practice law in Virginia. He relocated from Elizabeth County to Spotsylvania County. In Spotsylvania, Wythe met Zachary Lewis. Lewis had a long history in the law practice.

In 1748 Wythe returned to Williamsburg in Elizabeth County. He teamed up with another lawyer Benjamin Waller to open a legal office. Waller was Zachary Lewis’ kinsman. Wythe practiced law with Waller until he was elected to the colonial assembly in Virginia.

In 1748 George Wythe was seconded to the house of Burgess which was the colonial assembly of representatives. He was then appointed as clerk to serve in two powerful house committees. These were the Privileges and Elections, and the Proposition and Grievances committees. In 1754, Wythe was also appointed as the King’s legal representative in Virginia. Later in the year, Wythe was nominated to replace the seat of Armistead Burwell which fell vacant after his death. In 1753 he replaced the Virginia Attorney General who was sent to London. He relinquished the post when Peyton Randolph returned.

In 1759 Wythe was nominated to the William and Mary College as a representative. He served for three years until 1761. In 1765 as a member of the House of Burgess, Wythe opposed the introduction of the British Stamp Duty on the American colonies. He wrote a correspondence to the British parliament in London.

In 1768 George Wythe became the mayor of Williamsburg. He continued to serve in the mayoral post until the clamor for independence. In 1775 he was elected as a delegate to the First National Convention in Philadelphia. He argued for the Declaration of Independence Draft. He became the first signatory on the document declaring his zeal for freedom in September 1776. In September 1777 Wythe became the Speaker of the House of Representatives in Virginia. He doubled up as the Justice of the Supreme Court in Virginia until 1778.

George Wythe had other achievements outside politics. In 1776 he designed the official seal of the state of Virginia. In 1778 he became the first professor at Law in the first law college in the US. He taught many luminaries during his lecturing career. American statesmen like Thomas Jefferson, William Munford, and Benjamin Franklin were his students. Keeping with his Quaker faith teachings, Wythe provided boarding facilities to many of his law students at his home.

George Wythe grew up in a family which abhorred slavery. His father freed all the slaves he owned during his lifetime. In his will, Wythe’s father distributed his wealth to some slaves as part of the family members. Wythe pursued the same route. He became a strong proponent of anti-slavery campaigns. He freed slaves that he bought during his lifetime. His stance put him in collision courses with many other plantation owners in the colonies. In his will, Wythe bequeathed some slaves part of his estate as part of his children.

George Wythe died on the 8th of June 1806, in Richmond Virginia. He was buried at the St. John’s church compound in Richmond Virginia. The coroner’s report singled out poisoning as the cause of death. His grandnephew George Wythe Sweeney was arrested tried. He was later acquitted for lack of tangible convicting evidence. George Sweeney was the primary beneficiary in the late Wythe’s will, alongside two former black slaves.