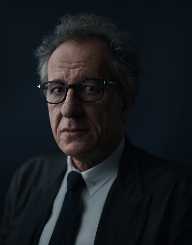 Geoffrey Rush is an Australian actor who made his permanent mark on the acting world with his brilliant performance in Shine. Before that, he also worked as a theatre actor. This Oscar-winning actor is well-known to the modern moviegoers as Captain Barbossa from the Pirates of the Caribbean franchise. Rush has also produced films like The King’s Speech.

Geoffrey Rush was born on July 6, 1951, in Toowoomba, Queensland, Australia. His star sign is Cancer. Rush’s father Roy was an accountant in the Australian Air Force and his mother Merle, worked in a departmental store.

Geoffrey Rush parents separated when he was only five, and his custody went to his mother.

Geoffrey Rush attended the University of Queensland and earned a Bachelor’s degree in English in 1971. He was very active in theatre in college, and he was offered work from the Queensland Theatre Company.

Geoffrey Rush went to Paris and studied the fine arts of acting at the Jacques Lecoq School of Mime, Movement & Theatre. Rush began appearing in stage plays and also performed in Waiting for Godot alongside Mel Gibson.

While Geoffrey Rush continued to provide quality performances, he didn’t receive the fame he deserved for much of his early career. However, things changed in 1996. Rush got the role of David Helfgott in the 1996 film Shine, and with its release, his career started shining as well. He became well-known in the acting community as well as among the viewers for his role. The role also fetched him a Golden Globe and an Oscar award. With this popularity, Rush’s fame continued to grow with stronger roles and films with a better paycheck. In 2005, he appeared in The Life and Death of Peter Sellers.

Geoffrey Rush has had an accomplished career full of several awards and nominations. He is part of a small group of people who hold the distinction of winning the Triple Crown of Acting – Academy Award, Emmy Award & Tony Award.

Geoffrey Rush has also won an Oscar award for Shine, and two Golden Globes. Rush has also been nominated for several BAFTA awards in his career.

Geoffrey Rush is married to actress Jane Menelaus. They met on the tour of The Importance of Being Earnest and instantly hit it off together. Rush fondly remembers how he proposed every night to his wife during the enactment of the play.

The two tied the knot in 1998 and had two children together – a daughter named Angelica, and a son named James. The couple lives with their children in Australia.