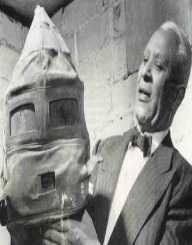 Garrett Morgan was an African-American inventor born on March 4th, 1877. He was also a community leader best remembered for his 1916 heroic rescue.  The rescue involved employees who were trapped in a water tunnel beneath Lake Erie.  Three others assisted him in the rescue which involved the use of safety hood device which he invented.  Supposedly, the workers were trapped after fire broke out following a natural gas explosion. Besides the rescue, Garrett Morgan is also remembered for inventing a chemical used for hair straightening.

Garrett Morgan made history when he became the first African-American ever to possess an automobile in Cleveland, Ohio. The 2002 book by Molefi Kete Asante listed him along with George Washington Carver among the 100 Greatest African Americans. The US government also honored him for the traffic signal invention which he invented. This invention led to the rescue of many lives globally.

Garrett Morgan was born on March 4th, 1877 in Claysville. This was a place occupied by African-American community situated in Kentucky, Paris in the United States. His father Sydney Morgan was previously Confederate Colonel John Morgan’s slave. Elizabeth Reed was his mother. She was also a former slave. Morgan’s maternal grandfather was Rev. Garrett Reed. He had a brother namely Frank who aided him in the Lake Erie rescue.

Garrett Morgan attended Branch Elementary School in Claysville where he attained 6th-grade education. At the age of 16, he relocated to Cincinnati in Ohio in search of a job.

After Garrett Morgan shifted to Cincinnati, he was lucky to find a job as a handyman for a landowner. Meanwhile, he hired a tutor from his savings. He was determined to continue with his studies.  Later in 1895, he moved to Cleveland still in Ohio. This is where he worked for a clothing manufacturer. His major work was in repairing sewing machines. His skill at fixing things gradually gained much fame within Cleveland.

In 1907, Garrett Morgan had attained much experience in repairing sewing machines. Therefore, he opened his shoe and sewing machine repair shop. In 1908, he founded the Cleveland Association of Colored Men. With the help of Marry Anne, his wife, he expanded his business in 1909.  As a result, their enterprise Morgan's Cut Rate Ladies Clothing Store came into being. He had a total of 39 employees at the shop. Together they made dresses, suites and various other clothing.

Garrett Morgan was behind the existence of G. A. Morgan Hair Refining Company. This was after he discovered a chemical that could straighten hair. He also discovered black hair dye. In 1910, he came up with a curved tooth comb used for straightening of hair.

In 1914, he launched National Safety Device Company to help market his safety hood smoke protection device. His motivation came from seeing firefighters struggle from smoke that they encounter in their line of duty. This device has since then helped many people from all over the world.

Sadly, Garrett Morgan later developed Glaucoma which led to his blindness in 1943. Since then, he suffered from poor health for the remaining years of his existence. However, this did not stop him from moving forward. He even developed a self-extinguishing cigarette among his last inventions.

Garrett Morgan tied the knot with Madge Nelson his first wife in 1896. The couple later divorced. In 1908, he married for the second time to Mary Hassek. Together they had three children.

In his later years, Garrett Morgan developed glaucoma. This was in 1943. As a result, the great inventor lost a high percentage of his sight. On July 27th, 1963, he took his last breath. It was shortly before the Emancipation Proclamation centennial celebration, a celebration he was greatly longing for. His death occurred in Cleveland situated in Ohio.