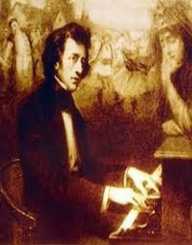 Frederic Chopin was born on March 1st in 1810. His place of birth was in Zelazowa Wola, Poland. During his early years, he was brought up in a middle-class family. Chopin earned his fame by being one of the world’s best Polish composer and a virtuoso pianist of his era. He began to hone his composition skills at the time he was only seven years old. By the time he was aged eight, he had began performing. Decades later, he migrated to Paris where he became a piano teacher. Frederic Chopin died at the age of 39.

Frederic Chopin was born on March 1st, in 1810. At the time of his birth, he was given the name Frédéric François Chopin. His father was called Nicholas Chopin whereas his mother was Justyna Krzy?anowska. Chopin was the second born child in a family of four children. While Chopin was still young, his mother introduced him to the world of music. This helps him a lot since, by the time he clocked six years, he had not only learned how to play the piano, but he also found a way of composing his tunes. Realizing the talent that young Chopin had, this impelled his parents to find him a professional tutor. His name was Wojciech Zywny. He tutored him from 1816 to 1821. Ludwika, his elder sister, also took advantage of this and learned from the professional musician.

With the help of the professional music lessons that Frederic Chopin gained, by the time he was seven years old, he had gained the courage and skills of performing in public events. In addition to his exceptional public performances, he also did his compositions such as Polonaise in G Minor-1818. Over the coming years, he kept on composing his piano pieces. This later encouraged his parents to enroll him at Warsaw Conservatory of Music. Here he took lessons from the Josef Elsner, who was also a Polish composer. After three weeks of completing his studies at the music institution, Chopin migrated to Vienna where he would gain wider experience in his music career.

Chopin made his first performance in Vienna in 1829. After his first successful performance, he went on to perform in Germany, Paris, Austria, and Poland. With all these performances surrounding him, he made up his mind to settle in Paris which helped him win friends over who were also composers, i.e., Felix Mendelssohn, Vincenzo Bellini and Franz Liszt.

At one time Frederic Chopin got engaged to Maria Wodzi?ska. However, the marriage was short-lived, and it was canceled. Shortly after, he gained a deeper feeling for Amantine-Lucile-Aurore Dupin who used the pen name, George Sand.