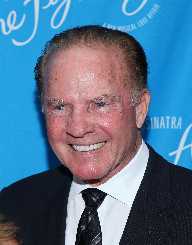 Frank Gifford was a very famous American football player who is also a television sports commentator. He played for the New York Giants of the National Football League, NPL for 12 years. He later went on a long career as a sports commentator as well as an announcer with ABC on Monday’s Night Football for 27 years. He achieved a lot of fame in his playing career as well as his presentation business. He won the NFL Most Valuable Player in 1956.

Frank Gifford worked as a commercial model as well as a famous commentator. He is very witty and filled with a lot of charm. Despite his love and feelings, he made the headline with his scandalous personal life. In fact, his well-built and good looking face always make people, especially girls to run after him.

Francis Newton Gifford that is also known as Frank was born on the 16th day of August 1930 in Santa Monica, California. He was born to Weldon Gifford and Lola Mae. His Father was an oil driller, and he grew up in great poverty. During the great depression, his father struggled so much with his work. His father was unemployed and struggled to find work. Frank Gifford graduated from Bakersfield High School. There, he loved the sport so much, but he could not gain a single athletic scholarship to the University of Southern California due to his low grade being an average student. However, he played for a full season of football for Bakersfield Junior College, and there he made it to the Junior College All-American team. There, he earned the grades needed for his enrolment into USC. He, however, graduated finally from USC in 1952.

NFL’s New York Giants selected Frank in 1952 being the 11th overall performance. His first performance with Giants was tough. Frank Gifford had two tough seasons with the Giants. He, however, decided to leave the team. He was convinced by the head coach as well as the offensive coordinator. Frank Gifford got installed in the back as the permanent left hand back. Surprisingly, he became he became the team’s signature player for a decade. He earned a lot of awards as a result of his performance. He suffered a concussion in 1961. This made him lose a whole season. He came back in 1962 and earned his final Pro Bowl selection in the following year. However, he retired after the 1964 season with a team record-breaking yards of 5, 434 career receiving yards.

Being an active player, Frank Gifford worked so much as a sports broadcaster on radio and television. Being a sports broadcaster, he worked with CBS and ABC. In 1971, he became a very regular personality with ABC-TV with his program Monday Night Football and Wide World Sports as well as some special occasions. In 1977, he got elected to the Pro Football Hall of Fame. He was honored for his outstanding sports personality with an Emmy at that time. However, things changed for him; he left Monday Night Football for good in 1998.

Apart from this, Frank Gifford, as a handsome athlete starred in the 1959 film Up Periscope. He also appeared in some televisions shows like Captain Kangaroo and Six Million Dollar Man. Apart from this, he worked so much as a commentator and made plays-by-play announcements with his partner Michael.

His first marriage was with a college sweetheart who happens to be his loving and first sweetheart. The two fellows had three children as well as got the marriage ended in divorce. In 1978, Frank Gifford married Astrid Lindley, his fitness trainer. The duo got separated in 1986. However, at the end of this year, he married Kathie Lee. This marriage brought two additional children. His wife did not divorce him as a result of his infidelities. Information was made as regards to Gifford’s extramarital affairs. The marriage between the two succinct until his death. Frank Gifford died of natural death on the 9th day of August 2015.