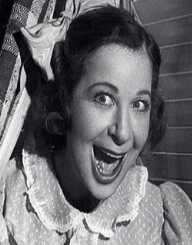 Fanny Brice was an American singer, actress, comedian, and model.

Fania Borach was born in New York City, on October 29, 1891. Her mother, Rose, was a factory worker. Her father, Charles, was a bartender. She had two brothers and a sister.

Her parents opened up a saloon together. They split up a few years later. In 1908, she left school to focus on her entertainment career. She used the stage name- Fanny Brice

Fanny Brice started to perform at a burlesque house called the Transatlantic Burlesquers. She was part of a production called “The Girls from Happyland Starring Sliding Billy Watson.” Two years later, she started her collaboration with the stage producer Florenz Ziegfeld. He created a series of theatrical revues called Ziegfeld Follies. She performed in them in 1910 and 1911.

Brice then teamed up with different songwriters, such as Blanche Merrill and Jimmy Hanley. She worked on several songs. The most famous ones were “My Man” and “Second Hand Rose.” She made many recordings for both the Victor Talking Machine Company and Columbia Records.

Brice returned to the Ziegfeld Follies in 1921. She incorporated many of her songs into the performances. She also starred in several Broadway plays, including Sweet and Low, Fioretta, and Crazy Quilt. In 1928, she appeared in the film My Man.

Fanny Brice was the first woman to appear in a sound film. She starred in several films throughout her career, such as Be Yourself, The Great Ziegfeld, and Everybody Sing.

In 1930, Brice appeared on a radio show called Philco Hour. In 1933, she began to appear regularly on the radio program The Chase and Sanborn Hour. She started using a personality of a spoiled toddler called Snooks.

Fanny Brice first presented it during the Follies, but she started to use it regularly on radio in 1936. Baby Snooks became quite popular, and it appeared on different programs. In 1944, Brice began her separate show.

It was first called Post Toasties Time, before being renamed to The Baby Snooks Show. In 1950, Brice appeared on Popsicle Parade of Stars, playing Snooks. This was her only appearance on television.

From 1910 to 1913, Fanny Brice was married to a local barber named Frank White. In 1918, she married Julius W. “Nicky” Arnstein. He was a professional gambler and con artist.

They had a daughter named Frances and a son named William. He spent three years in jail for theft. After he was released, he left and abandoned his family. She divorced him in 1927. Two years later, she married the stage producer Billy Rose. They got a divorce in 1938.

Fanny Brice died of a brain bleed on May 29, 1951. Her ashes were placed in a cemetery in Los Angeles.

After her death, Fanny Brice received two stars on the Hollywood Walk of Fame. One was for motion pictures, and the other one was for radio. She also won the Grammy Hall of Fame award.

Two theaters were named after her. The first one was built at the Stony Brook campus of the State University of New York. It was replaced by dormitories in 2007. The second one still stands at the School of Cinematic Arts at the University of Southern California.

Brice’s life served as an inspiration for the film Rose of Washington Square, created in 1939. She won a lawsuit against the studio for the invasion of her privacy. In 1946, the cartoon Quentin Quail had a character based on Baby Snooks. In 1964, the musical Funny Girl, also based on her life, opened on Broadway.

It was adapted into a film in 1968. Barbra Streisand, the lead actress, won an Academy Award for her portrayal of Brice. A sequel called Funny Lady followed in 1975. In 2010, a one-woman show called One Night with Fanny Brice premiered in New Jersey.