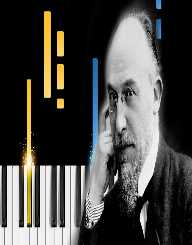 Erik Satie was born on May 17, 1866, in Honfleur, France. His parents were Alfred Satie and Jane Leslie. He had one brother, Conrad Satie. Jane died when Erik was just a child, in 1872. His father later remarried to a piano teacher in the last 1970’s.

Erik Satie was born in France, but his family moved to France when before he was born Erik Satie considered himself to be French, as he lived there for all of his life, even though his parents were both of Scottish descent. When he was a young teenager, he attended the Paris Conservatoire, a Parisian music school. While there, his teachers did not like him.

He was thought to be lazy and unmotivated. Satie left the school for some years because of his teacher’s dislike of him. He went back to the school in 1885, but he still could not impress his teachers, as they still believed him to be lazy. Little did his teachers know, that would all change sooner than later.

Erik Satie moved away from home in 1887, and it was around this time that his father published Erik’s first major composition, Gymnopedies. In the later 1880’s and early 1890’s, Satie continued to write and publish his compositions. He had some help with one of his musician friends, Claude Debussy. In 1891, Satie became the composer for the Rosicrucian Order. While in the order, he continued to work on his compositions. Also while working at the order, he met another musician, Maurice Ravel. The two musicians learned from each other.

In the mid-1890’s Erik Satie founded his church, The Metropolitan Church of the Leading Christ. Being the church's only member, he played the role of preacher, organist, and pamphlet maker. For the church, he wrote one of his great compositions, Grande Messe. However, he did not spend much time with the church, as he did not have enough money to keep it going. In 1896, he moved away from the church and closer to Paris. There, he reconnected with this brother so he would have a place to live. Erik Satie told Conrad about his religious ideas. Conrad agreed with most of the ideas, but he did not contribute money to his brother’s failed church.

Starting in 1899, Erik Satie began working in the music scene again. He started out as a simple cabaret piano played. He mostly played music that was already well-loved. He focused on this, as it paid better than producing his music. He still worked on some compositions on the side, though.

In 1905, Erik Satie decided to return to school to learn more about classical piano music. He attended the Organisation in Paris to study. He stood out in school, but not because of his talent. He was much older than many of the students who attended the school, being around forty years old at the time. Ignoring his age, he stayed at the school until his graduation in 1908.

After finishing school, Erik Satie once again focused on his compositions. (He had done some compositions while in school, but many of them were not published until after his death.) It was in the 1910’s when Satie finally became famous for his piano music. He was most famous for his miniatures, which he wrote to parody the famous styles of the time. Some of this famous songs are listed below.

Satie’s health went into decline in the 1920’s. Erik Satie had begun to drink heavily. This drinking had damaged his liver. He eventually developed liver cirrhosis because of his drinking, which caused his death on July 1, 1925. He died in Paris, France, when he was 59 years old.