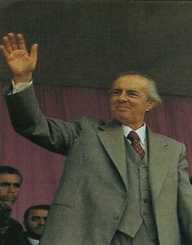 Enver Hoxha was a member of the Communist party in Albania.  Enver Hoxha eventually became the Prime Minister of that country and held great power for more than 40 years.

Enver Hoxha was born on October 16, 1908, in Gjirokaster, Albania.   During that time, it was a part of the Ottoman Empire.  His father Halil was a traveling clothing merchant.  Enver Hoxha was raised in the Bektashi Islamic faith.

Enver Hoxha went to a French secondary school in Korçë.  His studies included subjects like French history, literature, and philosophy.  This was also when Enver Hoxha was first exposed to Karl Marx's Communist Manifesto.  Enver Hoxha went to the University of Montpellier on a scholarship provided by the Queen Mother in natural sciences.

Enver Hoxha did not follow through on a science degree as he wanted to study either philosophy or law.  When he failed his exams, Enver Hoxha dropped out and enrolled at Sorbonne.  Enver Hoxha went to philosophy classes but did not pass any exams.  He did, however, attend meetings run by the French Communist party.

Enver Hoxha had his first job at the Albanian consulate in Brussels, Belgium.  Enver Hoxha was a secretary that worked in the personnel office of the Queen Mother for two years.

Enver Hoxha was dismissed when Marxist and communist books and literature were found in his possession.  Upon his return to Albania, Enver Hoxha taught at the French Lyceum of Korçë for about three years.

When Italy invaded Albania in 1939, Enver Hoxha was removed from his teaching position.  This was because he would not join the Albanian Fascist Party.  Enver Hoxha later owned a tobacco shop in Tirana.  Members of the small communist party would meet there.  The government also closed down his business.

In 1941, Enver Hoxha and other communists founded the Albanian Communist Party.  Enver Hoxha took the position of secretary of the party and held that position for almost 44 years.  When Albania was liberated in 1944, Enver Hoxha became the de facto Prime Minister of the country.

The power that Enver Hoxha held allowed him to pass some executive orders.  Enver Hoxha modeled his administration similar to that of Joseph Stalin.  Some of his most influential changes included the redistribution of farmland, better health care, and improved literacy rates.

As Prime Minister of the communist country, Enver Hoxha also worked on positive relations with the Soviet Union.  Enver Hoxha was succeeded by his deputy prime minister Mehmet Shehu, who was one of his closest friends and the second most powerful man in the country.

In 1956, Enver Hoxha called a meeting for party members to pass a resolution.  That resolution gave him the power as supreme party leader.  Even though the resolution passed, anyone who opposed it was put in jail.  With this power, Hoxha continued working on international relations with countries such as China.

Enver Hoxha also continued improving the quality of life for his countrymen.  This included women's rights and equal opportunity, electricity in all homes, and homeland security that included one-man bunkers throughout the country.  Even the birthrate increased with better legislation, better healthcare for all, and more protection for pregnant women.

The Albanian Party of Labor led by Enver Hoxha established a new constitution in 1976.  The focus was for Albania to become a more socialist state.  However, the government controlled much of what the people did.  Anyone who opposed the government or did anything that was suspicious would be sent to jails or labor camps.

Also, the self-sufficiency that Hoxha aimed at led the country to be the most isolated and poorest country in Europe with the lowest standard of living.

In the 1980s, Enver Hoxha wrote many books.  More than 60 books were published, including his memoirs. As his health started to decline, he passed some of his power to his successor Ramiz Alia.

In 1981, Enver Hoxha ordered a purge of government officials, including his friend and prime minister Mehmet Shehu.  These people did not share his philosophy

Enver Hoxha married fellow Communist party member Nexhmije Xhuglini after World War II.  The couple had two sons and a daughter.  Hoxha died on April 11, 1985, in Tirana, Albania at the age of 76.  The cause of death was ventricular fibrillation.

Enver Hoxha was the dominant leader of Albania for over 40 years.  While his tactics were harsh as he was inspired by the leadership of Joseph Stalin, he was also influential to his country.  His administration redistributed the land to farmers instead of just landholders.  This method increased agricultural production and allowed Albania to be more self-sufficient.

Enver Hoxha was well known for his harsh treatment of political opponents.  Clerics and political rivals were transferred to locations where their opposition could not be heard.

This could be remote villages under police control or prison. Enver Hoxha was also a supporter of the death penalty.  Some of those opponents were executed.