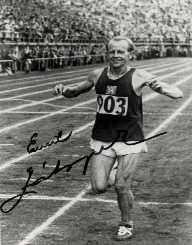 Emil Zatopek will be known as the Greatest Runner of All Time. This long-distance runner is the example of what hard work and challenging training regimes can do.

Emil Zatopek was born on September 19, 1922, in Koprivnice, Czechoslovakia. He was the sixth child born into his family. One of his early jobs was in the Bata shoe factory when he was sixteen years old. It was the strict factory sports coach got Emil Zatopek started on his first race. He ranked second in the race. By then he developed a strong interest in running.

Finnish long-distance runner and 12-time Olympic medalist Paavo Nurmi was the inspiration for Zatopek's training program. He joined the athletic club and applied these techniques to his routine. By 1944, Zatopek was breaking national records in the 2,000, 3,000, and 5,000-meter competitions. After World War II ended, Zatopek enlisted in the Czechoslovak Army. In 1946 while he was still in the Army, he was selected as a member of the Czechoslovak national running team in the European Championships.

Emil Zatopek ranked fifth in the 5,000-meter race and broke his personal record in Czechoslovakia.

In his running career, Emil Zatopek continued to break national and world records in running.

• 1948 – London Summer Olympics. Zatopek won gold the Men's 10,000 meters and silver in the 5,000 meter.
• 1949 – Ostrava, Czechoslovakia. Broke the world record in the Men's 10,000-meter race twice that year
• 1950 – European Championships. Won 5,000 meter and 10,000 meter races. That same year he set the Men's 10,000-meter record in a race in Turku, Finland
• 1951 - “One Hour Run,” Prague and Stará Boleslav. Broke the record in the international event recognized by the International Association of Athletics Federations
• 1952 – Helsinki Summer Olympics. Gold medalist in 5,000 meters and 10,000 meter run as well as the marathon. It was Zatopek's first ever marathon competition, and he set an Olympic record
• 1953 - Stará Boleslav, Czechoslovakia. Broke Men's 10,000-meter world record
• 1954 – European Athletics Championships. Won 10,000-meter race while becoming first athlete to beat 29 minutes. Bronze medalist in 5,000-meter race
• 1956 – Melbourne Olympics. Finished sixth in marathon after recovering from a six-week hospitalization for a groin injury

Emil Zatopek retired from his running career in 1957 after his poor finish in the Melbourne Olympics.

Emil Zatopek continued his career in the Army after he retired from running. He was promoted to Colonel in 1964. He also held a position at the Ministry of Defense.

Emil Zatopek married Dana Zatopkova in 1948 after the London Olympics. She was a javelin thrower. Some have said that one of his training techniques was to run with his wife on his back. Emil Zatopek died on November 22, 2000, at the age of 78. His death came after a long bout of pneumonia. This Olympian will be known for his running records. Even though his records have been surpassed by other runners, Emil Zatopek set a high standard for long-distance runners in the world.

Emil Zatopek was named the Greatest Runner of All Time by Runner's World Magazine with nicknames like “Czech Locomotive” and “Bouncing Czech.” In 2014, a life-size statue of Zatopek was placed at the Stadium of Youth in Zlín.