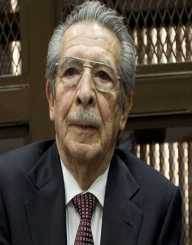 Jose Efrain Rios Montt, the Guatemala politician, is infamous for his atrocities during his dictatorship of one and a half years during the years of 1982 and 1983. As a military officer, he rebelled against the authoritarian President Romeo Lucas Garcia and dethroned him. As a de facto dictator, he had scant respect for human rights and his army was brutal against the ethnic group of Mayans.

Though his army persecuted them and killed them, Efrain Rios Montt had the support of President Ronald Reagan. He was overthrown by his defence Minister, Oscar Victores. His attempts to regain Presidency failed due to the legal hurdles created by peace activists against his genocide of Mayans.

Jose Efrain Rios Montt was born on June 16, 1926, in Huehuetenango, Guatemala. In 1946, he was trained in the Military Academy of Guatemala for five years. Later he joined the United States Department of Defence Institute. As a military officer, in 1954 he participated in the rebellion against Guatemalan President Jacobo Arbenz Guzman, engineered by the CIA of U. S.

In 1968, Efrain Rios Montt was selected as the Deputy Chief of the Staff of the Army. President of Guatemala, Carlos Manuel Arana Osorio chose him as Chief of Staff and Brigadier General of the Guatemalan Army. In 1973, he resigned his post in Washington embassy and contested for the position of President. He lost to the right-wing nominee, Brigadier General, Kjell Eugenio Laugerud Garcia.

Till 1977, Rios worked as military attaché in the Guatemalan embassy in Spain. In 1978, he joined the Pentecostal Church of the World, California as a pastor. During this period, General Fernando Romeo Lucas Garcia took over as the President of Guatemala, probably after rigging the elections. Garcia’s rule was highly detrimental to the poor farmers and the Catholic Mayan farmers created a group called the Peasant Unity Committee.

The agenda of the group was to fight for agrarian reforms and human rights of the peasants. On March 23, 1982, President Garcia was overthrown and the revolting leaders established a committee under the leadership of Efrain Rios Montt. The new committee disbanded the constitution and the legislature, and imprisoned and tormented the rebellious farmers.

On June 9, Rios ended the military rule and declared himself as the chief of the armed forces and the Minister of Defence. This move was countered by the rebels and they combined together under Guatemalan National Revolutionary Unity to fight the dictatorship. Efrain suppressed the rebellion by a military operation named ‘frijoles y fusiles’. He decimated about 600 Mayan villages and the army ruthlessly raped and murdered more than 250 women and children belonging to Achi Mayan tribe.

In 1983, Efrain Rios Montt was ousted by his Defence Minister, General Oscar Humberto Mejia Victores. Efrain started the Guatemalan Republic Front in 1989 and wanted to contest the elections. He was thwarted in his Presidential ambitions by a law which prevented military Coup leaders from contesting. His effort to become the President was again legally curbed in

1995. In 1998, Bishop Juan Gerardi Conedera of the Roman Catholic Church published a report, Recovery of Historical Memory (Never Again) listing the atrocities committed by the army during the Civil War. The result was disastrous and Conedera was killed after two days.

In 1999, Rigoberta Menchu, the Nobel Peace Prize winner launched his fight against Efrain Rios Montt for his mass killing of civilians during his rule. In 2003, the Supreme Court suspended his presidential campaign. His party men responded with violence against the order on July 24 and the day is remembered as ‘jueves Negro’ or Black Thursday.

The violence continued for two days and a TV journalist, Hector Fernando Ramirez or Reporter X died of heart attack due to the violence. Efrain Rios Montt was defeated by Oscar Berger of the Grand National Alliance. However the court debarred him from membership of the Congress. In March 2004, he was charged for the death of the journalist Ramirez and was barred from leaving the country.

In 2005, judge Santiago Pedraz wanted to try Rios for human rights violations based on the report of Menchu. However lawyers of Rios prevented the trial with repeated legal appeals. In 2007, Efrain became a member of the Congress. In 2012, he was again charged and arrested for genocide after the Attorney General Claudia Paz y Paz reopened the case.

Efrain Rios Montt continues to be under house arrest after he was granted bail. In March 2013, Rios was ordered to undergo eighty years of imprisonment for his role in mass killings. He appealed against the judgement.

Efrain Rios Montt married Maria Teresa Sosa Avila, and the pair has three children. They are Zury Rios Montt, Enrique Rios Sosa and Homero Rios Sosa. Zury is an active politician and contested for the post of President in 2015 as an independent.