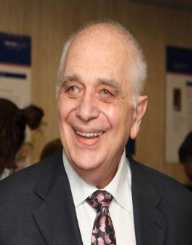 Edward Donnall Thomas was an American Physician and Professor of Medicine. He is a co-recipient of Nobel Prize in Physiology or Medicine for his revolutionary work in transplanting bone marrow-derived hematopoietic cells from one person to another. It was a game-changing milestone achievement in the treatment of patients with leukemia and other blood cancers or blood diseases.

Edward Donnall ‘Donn’ Thomas was born on March 15, 1920, in Mart, a small village in Texas, USA. His father Edward E. Thomas was a doctor by profession and was the only practicing doctor of the village. Donnall was born after his father’s second marriage and was his only child. His father’s first wife died early due to Tuberculosis. He attended the University of Texas at Austin in 1937. He studied chemistry and chemical engineering and secured his B.A. in 1941 and M.A.

In 1943. Edward Donnall Thomas enrolled himself at the Harvard Medical School for a study of medicine. He eventually received his M.D. in 1946. His one-year internship started immediately under the able guidance of Dr. Clement Finch who later became his lifelong friend after developing a unique attachment during the internship.

Edward Donnall Thomas joined the U.S. Army as a Physician for a two-year stint from 1948 to 1950. After leaving the Army, he undertook a Postdoctoral fellowship with the Massachusetts Institute of Technology. His next assignment was with his Alma Mater, Harvard Medical School where he started working as an instructor in 1953.

Edward Donnall Thomas started his professional career as Chief Medical Resident at the ‘Peter Bent Brigham Hospital’ in Boston. At that time Dr. Joseph Murray was preparing for his first kidney transplant. Donnall's interest and passion in this regard quickly drew him towards Dr. Murray, and he assisted Dr. Murray by taking care of his first kidney transplant patient successfully.

Edward Donnall Thomas was an avid student and intense researcher of bone marrow and leukemia right from his medical school days. His keen interest in the subject was further intensified during his association with Dr. Sydney Farber. He got his first laboratory in the new Jimmy Fund Building with the help of Dr. Sydney Farber. He treated a child with acute lymphoblastic leukemia when he was associated with M.I.T. His interest in bone marrow function stemmed from this incident.

Donnall’s work on marrow transplantation involving human patients and dog started in 1955 at the ‘Mary Imogene Basset Hospital’ in Cooperstown, New York. The study revealed the fact that ‘Bone Marrow Transplant’ in a human being is going to be an arduous task. He continued his research work on various facets of marrow transplantation with dogs.

In 1955, Edward Donnall Thomas became a Professor of Medicine at Columbia University’s College of Physicians and Surgeons before serving at a few hospitals and research centres. He continued the association till 1963 before moving to the University Of Washington School Of Medicine in Seattle in the same year. After that, he continued his research work in the Seattle Public Health Hospital till its closure in 1972.

Fred Hutchinson Cancer Centre of Seattle with cooperation from Swedish Hospital Medical Centre was providing excellent facilities and an option of amplifying the scope of cancer research program. Edward Donnall Thomas with his research team joined the Centre in 1975. Before that, in 1974, Thomas himself became its first Director of Medical Oncology followed by Associate Directorship of the Institute. Eventually, he became the Director of the centre’s clinical research division. In 1990, he resigned from the post of Director and finally retired from the Fred Hutchinson Cancer Centre in 2002. He received the honor of becoming the Professor Emeritus at the University of Washington in 1990.

Successful Bone Marrow Transplantation in leukemic patients is his magnum opus achievement. In 1956, Edward Donnall Thomas made his initial effort in successful bone marrow transplant as he made the transplant between a leukemia patient and his identical twin. All the aspects, technicalities and complications were successfully taken care of by Donnall himself and his team in this pioneering effort.

Based on the success of this transplant compiled with further refinements, Dr. Edward Thomas performed his first successful bone marrow transplant in a Leukemia patient using bone marrow from a relative other than an identical twin. The immediate benefit from this successful transplant could be fathomed by the fact that 85% of all lymphocytic leukemia patients started to survive the disease whereas the mortality rate was quite high among these patients before the success of the transplant.

Edward Donnall Thomas received the Nobel Prize in Physiology or Medicine jointly with Dr. Joseph E. Murray in 1990 for his work in transplanting bone marrow-derived hematopoietic cells from one person to another.

In the same year, he was also awarded the Presidential Medal in Science.

During his undergraduate studies at the University of Texas at Austin, Edward Donnall Thomas met his future wife, Dorothy Martin. She was then training to be a journalist. Edward and Dorothy married soon after they met. They had three children.