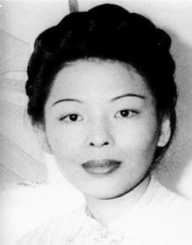 Dai Ailian is remembered in history as one of the pivotal women who helped spread and define dance, most specifically Western ballet, in China which earned her the moniker "Mother of Chinese Ballet".

She married the Chinese painter Ye Qianyu in 1940 a short while after she arrived in Hong Kong. The ceremony was held in Chongqing but their marriage came to an end when the couple decided to separate in 1956. She was married a second time later that year but that too ended up in a divorce in 1967. After her divorce with her second husband, Ailian stayed single throughout the rest of her life. She died on February 9, 2006.

Born on May 10, 1916, in Couva Trinidad as Eileen Isaacs, she came from a family of 3rd generation Chinese lineage that originated from Xinhui, in Guangdong Province, China. Inspired by her mother’s love for music, she developed a similar passion for dancing and started taking ballet classes at the age of 7.

She continued her dancing lessons and her hard work and passion eventually paid off when she was selected at the Jooss School of Ballet along with 11 other students under the tutelage of Anton Dolin. Her admission to the school prompted her to move to England.

Upon being selected, she adopted the surname Dai, after her father’s nickname and went on to take modern dance at Jooss and even developed her skill under the mentoring of Rudolph von Laban. While in London, she choreographed her own solo performance in 1936 called Yang Giufei which was based on the historical character. The following year in 1937, she partook in a fund-raising event organized by the China Campaign Committee in London of which the beneficiary was the China Defense League which was based in Hong Kong.

In 1939, despite not knowing how to speak the Chinese language, Ailian left London and traveled to Hong Kong for a bit. Afterward, she traveled all over China and studied operas and folk dances which greatly inspired her to form her own distinct style of choreography.

The Republic of China was established in 1949 and by then, Ailian was pushing for new development in the field of dance, along with the establishment of new dance schools. The same year, she was appointed as the deputy director of the Central Song and Dance Ensemble. 5 years later, she was named as the principal of the newly established Beijing Dancing School in 1954. The early 1950s proved to be one of the highlights of her dancing career such as the production of Dove of Peace, China’s first ever ballet production which she not only created but also starred in. Other highlight performances and production include Lotus, Longing for Home, Flying Apsaras, The Mute Carries the Cripple, Anhui Folk Dance, Tibetan Spring, and For Sale.

During her later years, she served as a judge on international competitions and was even appointed as UNESCO’s vice-chairman for the International Council of Dance in 1982. She also served as an official at the cultural and educational organ of the United Nation of which she attended the annual council meeting until her death in 2006.