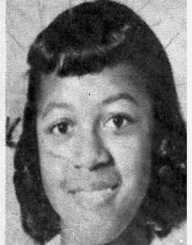 Cynthia Wesley was one of the four young girls who was killed during the 16th Street Baptist Church bombing which took place at the African American 16th Street Baptist Church in Birmingham, Alabama. The explosion that shook the entire nation took place on a Sunday morning on September 15, 1963. This brutal act of racial terror against African Americans was carried out by four members of white supremacy radical group Ku Klux Klan. The bombing gave more strength to the decades-long civil rights movement and paved the way for the enactment of the Civil Rights Act of 1964.

Cynthia Dionne Wesley was born and brought up in Birmingham, Alabama, on April 30, 1949. She was the first adopted daughter of Claude and Gertrude Wesley. Both of them were teachers. Wesley attended Ullman High School. She was a meritorious student who was good at maths and reading and was a member of the 16th Street Baptist Church which became a meeting point for civil rights activists and leaders including Martin Luther King Jr., Ralph David Abernathy, and Fred Shuttlesworth. Wesley grew up in a segregated neighborhood. Birmingham was a tense and violent city back then with repeated bombings at black institutions being a common occurrence. It was thus nicknamed ‘Bombingham’.

In the wee hours of a Sunday morning, four perpetrators of the Ku Klux Klan planted a large number of dynamite sticks under the steps of the church which was close to the girls’ basement room. At approximately 10.22 a.m., when the girls were changing into their choir clothes for their closing prayer, the bomb exploded killing Wesley along with three other children. She was only fourteen years old.

The explosion was so strong that it created a huge hole on one side of the church. Several vehicles parked outside the church also suffered damages. Around two dozen other people including children were severely wounded while many others suffered minor injuries. The powerful blast almost decapitated one of the casualties.

This outrageous incident caused national outrage and sparked riots between several white and black groups. One of the victims Carole Rosamond Robertson had a private family funeral. Wesley along with the other 2 victims Addie Mae Collins and Denise McNair were buried at a joint funeral where over 8,000 mourners including Martin Luther King Jr. turned up to pay their last respects. But the case didn’t see any light until 1971 when it was reopened by Attorney General William Baxley, three years after FBI closed the case due to non-cooperative witnesses and lack of physical evidence.

In 1977, long-time suspect Robert Chambliss was held responsible and was imprisoned for life. After Chambliss’ death, FBI probed further and got new pieces of evidence which convicted Thomas Blanton Jr. and Bobby Frank Cherry in 2001 and 2002 respectively. The fourth conspirator Herman Frank Cash passed away in 1994 before facing any charges. Chambliss snitched on Gary Thomas Rowe Jr. as the fifth conspirator and the latter remained on FBI’s radar for a long time, but due to lack of hard evidence he was never convicted.

Cynthia Wesley along with the three other children became national icons and an embodiment of racial discrimination that had crippled America back then. They were seen as Country legend Joan Baez dedicated her song "Birmingham Sunday," to the memory of the girls. In 1997, director Spike Lee released the documentary titled "4 Little Girls” based on the tragic incident. All four of them were awarded the Congressional Gold Medal in 2013.