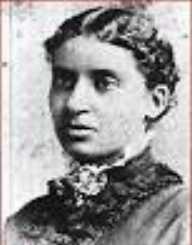 Charlotte Forten was a remarkable activist and woman of intellect born in wealth during her time. She is best remembered for her diary “Life on the Sea Lands” which was published numerous times and narrated the struggles she endured during the abolition movement.

Charlotte Louise Bridges Forten was born on August 17, 1837, in Philadelphia, Pennsylvania. Her parents were Mary Virginia Wood and Robert Bridges Forten. They were a prominent and wealthy clan in Philadelphia. Their family was a member of the early abolitionists during the time. Forten, along with her mother and aunts, Margaretta Forten and Harriet Forten Purvis, and her grandmother, also named Charlotte, established the bi-racial movement called Philadelphia Female Anti-Slavery society.

The Sheltered but Educated Child

Being an only child, she lived a very sheltered life and had private tutors to educate her, instead of attending local segregated schools.

She spent most of her childhood in Salem, Massachusetts with abolitionists couple Charles and Sarah Redmond. Forten was enrolled at Higginson Grammar School for Girls. The school was an exclusive all-white school made up of 200 students and Forten being the only colored student.

Upon her graduation at Higginson Grammar School in 1855, Charlotte Forten wrote to her father asking for permission to attend Salem Normal School. His father initially rejected the offer. Fortunately enough, Principal Shepard encouraged Forten to write to him again, and this time he gave his approval. However, his father refused to pay for her tuition and Shepard lent her the money Forten needed to pay for her schooling.

At Salem Normal School, Forten trained to be a teacher and engrossed herself in the subject of literature.

In 1856, Charlotte Forten received her first task as a teacher. She was the first African-American teacher ever to be employed to teach white students at Epes Grammar School.

To support herself, Forten taught at Epes Grammar School for two years until she contracted tuberculosis. With her health gradually deteriorating, she finally moved back to Salem in 1859.

On October 27, 1862, Charlotte Forten went south to teach illiterate black students at South Carolina in an abandoned plantation called the Oaklands. Forten wanted to establish a connection with her fellowmen, but her education and upbringing only set her apart from them.

During her stay at the Oaklands, Forten wrote down her daily experience in a diary which was later published under the title of “Life in the Sea Lands.” It was considered as one of the most critical documents in later years for it told the story of Forten’s life as a free black woman in the Civil War.

In only two years, Forten’s health once again took a turn for the worse, and she was forced to leave the Oaklands and once again sent back to Philadelphia in 1864. Her diary was published in the same year in the May and June issue of Atlantic Monthly.

Life as a Civil Service Worker

After her teachings at Oaklands, Charlotte Forten landed a job in Washington D.C. in the U.S. Treasury Department as a recruitment clerk for teachers.

Forten also met her future husband, Francis J. Grimké, in Washington D.C. The two were married in December of 1878. Forten was 13 years older than Grimké, and they were married at the age of 41 and 28 respectively. She bore him a daughter in 1880, but she died in infancy.

Grimké was of mixed heritage and worked as a pastor of the Fifteenth Street Presbyterian Church in Washington D.C. Forten went on to assist her husband in the ministry and extended a helping hand to the community. She organized missionary groups and provided education and charity to her fellowmen while taking permanent residence in Washington.

In later years, the couple raised Grimke’s niece, Angelina Weld Grimké instead of her parents.

Charlotte Forten died at the age of 77 in her home at Washington in 1914.