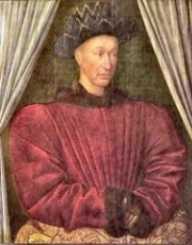 When his brother John died in 1417, King Charles VII became the Dauphin of France. He also became Lieutenant-General. He became regent in December 1418. In 1419, Charles VII lost authority in the north of the country when John the Fearless, Duke of Burgundy was murdered at Montereau. At the time France was involved in The Hundred Years War (1337-1453) which was raging with the House of Plantagenet of England. The English and Burgundians believed that the murder was planned and Charles was disinherited by the Treaty of Troyes in 1420. Under the treaty, Charles VI recognized Henry V of England as his successor to the French crown.

When his father died in 1422, Charles VII returned to Mehun-sur-Yevre, the seat of government and claimed the throne. He relocated his court to Bourges. The House of Valois was also embroiled in a civil war with the House of Valois-Bundy who were supported by the English. The southern areas of France recognized him as king, but the more powerful northern provinces under the influence of the English were hostile. The English Duke of Bedford, Regent of Henry VI of England, ruled a vast area of France including Paris.

Events leading up to his eventual crowning in 1429 were spearheaded by Joan of Arc who along with Robert de Baudricourt, formed an army of supporters. Joan of Arc visited Charles VII in Chinon on the 23 February 1429 to meet him for the first time. His interaction with Joan of Arc and her spiritual faith in the French monarchy restored his confidence and belief in his divine role as king. He was referred to her as Noble Dauphin. Joan of Arc’s further involvement in the battle of Orleans forced the English to lift the siege (May 1429) and led to the French beating the English at the Battle of Patay in June 1429. By the 17 July 1429, Charles VII was crowned King of France in Reims Cathedral.

The Treaty of Arras was signed in 1435 by Charles VII and the Duke of Burgundy. The treaty confirmed that the Burgundians no longer supported the English and were supportive of Charles VII of France. Under Charles VII’s rule, France expelled the English, and after the Battle of Castillon (1453), the only exception was the Pale of Calais.

Charles VII’s following years were marked by conflict with his son and heir, ongoing problems with the areas he had reconquered and Philip of Burgundy’s ambition to rule France.

Charles VII married to Marie d'Anjou, the daughter of Queen Yolande of Aragon in 1422. The couple had fourteen children. He died on the 22 July 1461 at Mehun-sur-Yèvre.