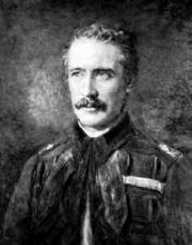 Charles George Gordon was born on January 28th, 1833. He was famously known by several names including Chinese Gordon, Gordon of Khartoum and Gordon Pasha. He was famous for being a British administrator and an army officer. While serving in the British Army, Gordon rose to fame as a result of the expeditions that he made both in Northern Africa and China. In his career, he was offered the role of serving as a commander of over 3, 000 Chinese soldiers. This army was called Ever Victorious Army. This gave him high acclaim since he led the army in defeating the Taiping Rebellion and later seized its main military base dubbed as Changzhou Fu. From this victory, Gordon was bestowed with awards from the Chinese and the British government.

Major Charles George Gordon was born on January 28th, in 1833 in a place called Woolwich in London. His father also served in the army as a commander. He was called Henry William Gordon. On the other hand, his mother was called Elizabeth Gordon. Serving in the army meant that Gordon’s family had to move from place to place. Therefore, Gordon had to be raised in England, Scotland, Ireland and the Ionian Islands. For his early education, Gordon enrolled at Fullands School situated in Taunton. Later, he went to school in Taunton School before later joining Royal Military Academy in Woolwich where he graduated in 1852. During the same year of his graduation, he was ordered to serve in the Royal Engineers. Here, he was to serve as a second lieutenant. Two years later, he earned his first promotion as a full lieutenant.

Soon, Crimean War erupted. This led to his deployment in 1855 to Balaklava which was found in the Russian Empire. It was at this time that he worked in the Siege of Sevastopol. This was followed by the voyage to Kinburn before later making his return to Sevastopol. A year later, he joined an expedition to Bessarabia where they were to draw international borders between the Ottoman Empire and the Russian Empire.

In 1858, Charles George Gordon made his official return to Britain. After that, he migrated to Chatham where he would serve as an instructor. The following year, he rose his military ranks to become a captain. He later joined forces with the British army in 1860 where he fought in the 2nd Opium War which was against their rivals, China. This led to the seizure of Beijing and the destruction of Summer Palace.

After this triumph, Gordon went back to England in 1865 and spent the next five years overseeing the construction of Thames fort. It did not take time before he was assigned another commission in Egypt, Africa. His main task was to settle existing boundary wars primarily found along the mouth of river Danube. In 1874, he fought under the Egyptian Army where he led his troops to Khartoum on his first mission and later to Gondokoro in South Sudan.

With time, Charles George Gordon found it wise that slavery should come to an end. His perceptions were different from what the Egyptian governor of Sudan had in mind. This led to conflicts and prompted him to travel back to London in 1876. The following year he returned to Sudan, this time as the governor general.

Charles George Gordon is to be remembered for leading over 3, 000 Chinese soldiers (Ever Victorious Army) to successfully conquer the Taiping Rebellion. This quest took Gordon eighteen months to accomplish and officially seize its main military base at Changzhou Fu.

After being captured by the Mahdist forces, Major Charles George Gordon was beheaded on January 26th, in 1885. He died at the age of 51.