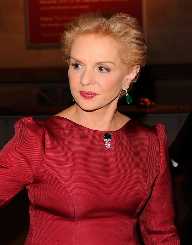 Carolina Herrera is a fashion designer who is best known for dressing multiple First Ladies of the United States of America.

Carolina Herrera was born in Caracas, Venezuela on 8 January 1939. Her father, Guillermo Pacanins Acevedo, was an air force pilot and a former governor of Caracas. Her mother is Maria Cristina Nino Passios. Her grandmother fostered a love of fashion in Herrera by buying her designer clothing and bringing her to fashion shows. As a child, Herrera used to make clothes for her dolls.

In 1965, Carolina Herrera worked for Emilio Pucci at his Caracas boutique. She became well known around Venezuela as one of high society’s best dressed women. In 1980, she moved to New York bringing twenty dresses she had designed with her. She displayed them in her apartment and after receiving positive views from friends she decided to become a professional designer. Publishing tycoon Armando de Armas bankrolled the opening of Herrera’s first studio and showroom in New York.

1991 saw Herrera create the bestselling ‘Herrera for Men’. In 1995, Puig bought out Herrera’s fashion business and made her creative director. In 2000 she opened a boutique in Manhattan and looked to expand into Europe. Herrera’s CH brand has 129 freestanding stores throughout the world and her perfumes has thousands of points of sale across the world. In 2016, Herrera launched a new scent called ‘Good Girl’.

Carolina Herrera has designed for many famous names including Jaqueline Kennedy and Renee Zellweger. Estee Lauder was one of Herrera’s earliest clients. Herrera’s most noted work comes from designing for many of the First Ladies of the United States of America. Laura Bush, Michelle Obama, and Melania Trump have worn Herrara designs. Herrera’s best-known line is the ‘Ready to Wear’ brand which has designs for both men and women.

In 1957, Carolina Herrera married Guillermo Behrens Tello, a Venezuelan landowner. Herrera was just 18 at the time of the marriage. The pair had two daughters Mercedes and Ana Luisa. Herrera and Tello divorced in 1964. Herrera married Reinaldo Herrera Guevara, a Venezuelan TV presenter, and they have two daughters together, Carolina Adriana and Patricia Cristina. Both Carolina and Patricia work on the creative direction and design side of the company. In 2009 Herrera became a naturalised American citizen.

Carolina Herrera was the womenswear designer of the year 2004. She has received Spain’s Gold Medal for Merit in the Fine Arts. In 2012 she won the Style Awards ‘Designer of the Year’. Herrera has appeared on the cover of fashion magazine Vogue seven times.

Carolina Herrera is a goodwill ambassador for the Intergovernmental Institution for the use of Micro-Algae Spirulina against Malnutrition.