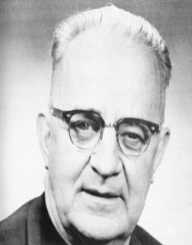 American politician Eugene “Bull” Connor was born Theophilus Eugene Connor in Selma, Alabama in the United States on the 11 July 1897. His father was Hugh King Connor who worked as a telegraph operator, and train dispatcher, and his mother was Molly Godwin Connor. His father’s occupation meant that the family lived in various places across America during his childhood.

The family was living in Atlanta, Georgia when Molly Godwin Connor died of pneumonia. As his father’s work meant that he had to continue travelling around, Connor spent his early teenage years living with relations.

After his marriage in 1920, Bull Connor and his wife settled down in Birmingham, Alabama. Initially, he worked as a salesman and telegraph operator and then became a successful sportscaster on the radio.

Bull Connor first entered politics in 1934 when won a seat in the Alabama House of Representatives. He served in the legislature from 1935 until 1937. He supported poll tax reform, opposed tax increases and legislative pay raises and was opposed to a bill designed to dampen labour union activity.

In 1937 he was elected Birmingham’s Commissioner of Public Safety which meant that he had overall administrative authority over the Police Department, Fire Departments, libraries, schools, and public health services. He was in favour of limited government, low taxes and fighting crime as well as being sympathetic to working people. He was also a segregationist. He was re-elected three times: 1941, 1945 and 1949.

Bull Connor was a delegate at four Democratic National Conventions: 1948, 1956, 1964 and 1968. He led a Southern delegates walk-out in protest against President Harry S. Truman’s civil rights policies at the 1948 convention. In 1950, he made an unsuccessful run for Governor, returning to his role of commissioner when he lost.

In 1953, he did not seek re-election to the Commission because he was dealing with a scandal involving charges of police corruption as well as an extramarital affair. Both charges were resolved, and he was voted back in as Commissioner in 1957. He ran for governor a second time in 1962 but was again unsuccessful. He was not a Klansman but was a white supremacist who protected Klansmen at times.

Bull Connor dealt ruthlessly with law and order when the civil rights movement was taking place. He ordered Birmingham Police to steer clear of the bus station in 1961 when Klansmen were attacking buses and Freedom Riders. On the 2 May 1963, when Martin Luther King, Jr. and the Southern Christian Leadership Conference arrived in Birmingham to march with a thousand students and teachers from the 16th Street Baptist Church to downtown Birmingham, 1200 children were arrested. The following day, when another thousand marchers gathered, Connor ordered the use of attack dogs and fire hoses. Eventually, 3,000 marchers were incarcerated.

After leaving office in 1963, Bull Connor was president of the Alabama Public Service Commision (1964-73)

Bull Connor married in 1920  Beara Levens, the daughter of a lumber-mill operator. They had one child, a daughter. In 1966, Connor had a stroke which left him confined to a wheelchair. He suffered another stroke in February 1975 and died on the 10 March 1973. He was 75 years of age.