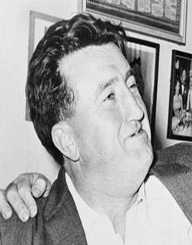 Brendan Behan is revered in Ireland for his contribution in the revival of the Irish literature. He used poetry and theater to aid the Irish revolutionary war against the British.

Brendan Francis Behan was born on February 9, 1923, in Dublin Ireland. His parents, Stephen and Kathleen Behan were in the middle class working society. His parents introduced him to the Irish nationalist movement in his childhood. Behan dropped out of the local Catholic school at the age of 14. He was employed as a painter.

Brendan Behan joined the Irish revolutionary movement when he barely ten years. Even then, he was increasingly active in the underground operations of the IRA. IRA was the anti-British revolutionary movement. Two years later in 1939, he was arrested in Liverpool, England after a sabotage mission. Since he was underage, Behan was sent to children reforming school in Borstal. He was released after three years. Behan returned to Dublin upon his release.

The IRA increased its sabotage missions during the WW2. In 1942, Brendan Behan was arrested again for attempting to kill two British police officers. He was tried and jailed for 14 years. He was barely 20 years old. Behan gained back his freedom in 1946 under a blanket amnesty given by the British. The following year, he was arrested and convicted of aiding a prisoner to escape. He served a brief jail term and was released. Due to continued involvement in the revolution, Behan was deported to France in 1952.

Brendan Behan started to write while in prison. In the IRA, he met several Irish literary luminaries. They encouraged him to join the Dubin literature movement. Its main agenda was to use literature as a medium of advancing the revolution.

His early writings were short political stories. Borstal Boy was one of them. After his return to Dublin from France, Behan started writing dramatized plays. Owing to the sensitive content, his plays were turned down in Britain. He perfected his plays in his native Irish language. He rebranded himself by working for local media stations. His popularity grew as more people appreciated his work.

In 1954, Brendan Behan published his play The Quare Fellow. It was set in the backdrop of Mountjoy Prison in Dublin. The play was widely acclaimed and ran at the Pike Theater for over six months. The Quare Fellow was again rehearsed and played at the Broadway Theater in New York a few years later. He released another play The Hostage in 1958. Four years later he published Brendan Behan’s Island. In 1963, he produced Hold Your Hour and Have Another. The following year, he released Brendan Behan’s, New York.

Later after his death, his three books we republished. These were Confessions of An Irish Rebel, the Scaperer, and After The Wake.

Brendan Behan was a satiric comedian and playwright. His style was comical with hard-hitting facts. He made people laugh while passing on his political messages. This style of production made him the most admired literary figure in Dublin.

Brendan Behan's obsession with liquor started in his childhood. He used to go on drinking outings with his grandmother. His rough upbringing also contributed immensely to this vice. Doctors advised him to quit alcohol after being diagnosed with diabetes. He ignored the medical advice. Behan was hospitalized several times due to poor health. Alcoholism took the better of him. He appeared on live television shows heavily drunk. Some of his fans shunned his plays due to his alcoholic reputation.

He was married to Beatrice Salkeld for nine years. This was from 1955 to 1964. They had a daughter.

Brendan Behan died on March 20, 1964. The IRA recognized his revolution input. During his funeral, Behan was treated with full military honors.

His influence was felt beyond the Irish borders. In the US, his plays were widely accepted at the New York Broadway Theater. He was invited to attend the swearing-in ceremony of US president John Fitzgerald Kennedy. Kennedy was the first Irish American Catholic to be elected president of the USA. Behan eventually declined to attend. He gave no official reason.

Behan had little formal education. He was a heavy drinker. Despite these shortcomings, he managed to contribute to the socio-cultural and political state of his native Ireland. At his death, Behan had six plays and seven books.