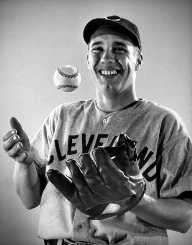 Bob Feller is considered as one of the greatest pitchers the world of baseball has ever encountered. He played as the pitcher for the Cleveland Indians for a span of 20 years, regulating the team into the American League.

Baseball Hall of Famer Ted Williams who is a famous slugger credited him as “the fastest and one of the best pitchers I ever saw during my career.” Feller has an impressive win-loss record of 266-162 and played for 18 seasons for this team, the Cleveland Indians.

Feller married twice in his life; firstly to Virginia Winther of which she bore him three sons namely Steve, Martin, and Bruce. After 28 years of their union, they separated in 1971. He then married until his death at the age of 92 on December 15, 2010. Feller died of complications due to Leukemia.

Known in his later life as “Bullet Bob” and “Rapid Robert” for his extraordinary pitching, he was born as Robert William Andrew Feller in Cleveland, Iowa on November 3, 1918. Feller grew up in a farmhouse to which he owes his superb arm strength by hailing bays and milking cows.


The Heater From Van Meter

Feller initially played as an outfielder during his younger years. He started pitching at the age of 15 for Oakview when their starting pitcher was unavailable due to an injury. His Major League debut occurred when he was 17 years old on July 19, 1936, where he played as a relief pitcher as opposed to the Washington Senators.

During high school, he continued to pitch for his school’s baseball team, Van Meter High School, while simultaneously playing for the Farmers Union team in the American Amateur Baseball Congress.

By this time, news of the baseball prodigy with a quality fastball spread throughout the state. Soon enough, major league scouts came to watch him play during baseball tournaments. Feller received a lot of offers from varying major league teams but he opted to sign a professional contract with the Cleveland Indians.

His baseball career was put on hold from 1941 to 1945 in order to render military service during World War II. During the war, he served in the US Navy as USS Alabama’s Chief Petty Officer. Feller enlisted at the forces 2 days after the attack on Pearl Harbor, making him the first American athlete to do so. Before he left for combat, he married his first wife, Virginia Winther, in 1943 shortly after his father’s death.

Feller was discharged on August 22, 1945, and returned to baseball to pitch for Cleveland.

Besides his legendary pitching, Feller is known to hold several records of his baseball prowess.

At the off-season of 1955, he took on the role of president at the Baseball Players’ Association.

He officially resigned as a player from the Indians on December 28, 1956, spending the entirety of his 18-season career with them. Feller made his last appearance at the Major League Baseball for the Cleveland Indians on September 30, 1956.