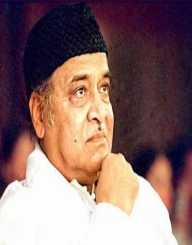 Bhupen Hazarika was a well-known and celebrated Indian singer and filmmaker who wrote and sung his lyrics in The Assamese Language. He is also acknowledged for introducing culture and folk music of Assam to Hindi cinema at the national level. He has received several esteemed awards such as the second highest Civilian Award in the Republic of India in 2012.

Bhupen Hazarika was born on September 8, 1926, to parents Nilakanta and Shantipriya Hazarika in Sadiya Assam.As the oldest of nine siblings, Hazarika was exposed to musical influence by his mother who sung to him lullabies and traditional music of Assam. In 1929 they relocated to Bharalumukh region of Guwahati as his father searched for better prospects. Later in 1932, his father moved to Dhubri and Tezpur in 1935.

At the age of 10, Bhupen Hazarika was discovered by the famous Assamese lyricist, Jyotisprasad Agarwala, and Bishnu Prasad Rabha, a renowned Assamese artist and revolutionary poet, where he sang a Borgeet taught by his mother at a public function.1n 1936, he recorded his first song at the Aurora studio for the Selona Company. Subsequently, in 1939, at the age of 12, he sang two songs in Agarwalas film Indramalati, ‘Kaxote Kolosi Loi’ and ‘Biswo Bijoyi Naujawan.

Notably, at the age of 13, he wrote his first song 'Agnijugor Firingoti Moi,' which opened the door to becoming a lyricist, composer, and singer.

Bhupen Hazarika received his early education at Sonaram High school at Guwahati, a government school in Dhubri in 1940.Later in 1942, he earned his BA in Intermediate Arts from Cotton College and MA from Banaras Hindu University in Political Science in 1946.

Bhupen Hazarika worked at All India Radio in Guwahati when he won a scholarship from Columbia University in 1949. There he earned a doctoral degree in 1952 on his thesis which aimed to prepare India’s primary education to incorporate Audio-Visual Techniques for impacting knowledge in adult education programs, ‘Proposals for Preparing India’s Basic Education to use Audio-Visual Techniques in Adult Education.’

While at Columbia University, Bhupen befriended Paul Robenson, a prominent civil rights activist, who influenced him to compose his song ‘Bistirno Parore,' based on the imagery and theme of Robenson’s Ol’ Man River. This song became popular and was translated into other Indian languages and inspired him to compose other Indian songs.

In 1953 Bhupen Hazarika began associating with Indian People’s Theatre Association (IPTA) and became the secretary of reception committee of Third All Assam Conference held in Guwahati in 1955.In 1967, he was elected as a member of Assam Assembly from Naubiocha constituency.After his studies, he served as a teacher at Gauhati University. Later, he left the job and relocated to Kolkata and got placement as a director and singer.

Some of the Assamese films and Bangla movies he created include; ‘Aarop’ in 1973, ‘Chameli Memsaab’ in 1975 and ‘Shimana Perye’ in 1977.He also sang in movies such as ‘Era Bator Sur’ in 1956, ‘Shakuntala Sur’ in 1973 and ‘Rudaali’ in 1993.During this period he won several awards in Assamese films such as; ‘Shakuntala’ and ‘Pratidhwani’ and was considered as a new trendsetter in Bengali music. He also composed music films from Bangladesh which got international recognition.In 1993, he was elected the president of Asam Sahitya Sabha.

Bhupen Hazarika was awarded the fourth highest civilian in the Republic of India in 1977.
Later in 1979, he won the Arunachal Pradesh Government’s Gold Medal for contributing towards Tribal welfare and Tribal Culture through cinema.In 1987, ‘Sangeet Natak Akademi Award’ was given to him to honor him as the highest practicing artist of that time.

In 1992 he was awarded by the Government of India with ‘Dadasaheb Phalke Award.' In the following year, he won the ‘Best Music Director National Award’ for ‘Rudaali’ in Japan. Honorably, in 2001 he was termed as the third highest civilian in India. 8years later he received the highest civilian award in the state of Assam.In 2008 he was awarded the Sangeet Natak Akademi Fellowship.

Bhupen Hazarika was posthumously in 2011 awarded by Bangladesh Government as a friend of the freedom struggle. In 2012 he was awarded the second highest civilian in the Republic of India.On May 2013, a postage stamp bearing his face was released by India post to honor him.

In the early 1970s, Bhupen Hazarika was featured in a film ‘Ek Pal’ by Kalpana Lajmi with a music score that was produced by his childhood friend and India’s top tea planter, Hemendra Prasad Barooah in 1986.

After this release, Hazarika concentrated on Hindi films which were directed by Kalpana Lajmi including; ‘Rudaali’ released in 1993, and ‘Daman: A Victim of Marital Violence’ released in 2001. He served as an MLA during 1967-1972 in the Assam Legislative Assembly and contested as a Bharatiya Janata Party in 2004 Lok Sabha elections.

Bhupen Hazarika met Priyamvada Patel while studying at Columbia University and later got married in 1950. As a couple, they had one son, Tej Hazarika, in 1952. Bhupen Hazarika is well known for his contributions in songs and music director to Hindi cinema. Some of his most famous songs include; ‘Bistirno Parore,' ‘Moi Eti Jajabor’ and ‘Buku Hom Hom Kore.'His outstanding films include ‘Arop,' ‘Ek Pal’ and ‘Rudaali.

In 2001, Bhupen Hazarika was hospitalized in the Kokilaben Dhirubhai Ambani Hospital in Mumbai and was later admitted to the Intensive care Unit on June 30.

Hazarika died on November 5, 2011, due to a multi-organ failure and his body was cremated near the Brahmaputra River.