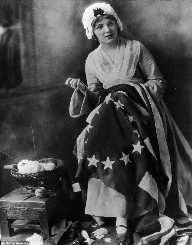 Betsy Ross is one of the best known American figures from the Revolutionary era. She wasn’t on the list of the President's vote. But she managed to hold a patriotism icon in the late 18 century. Tremendous stories surfaced that she had a chance to sew the first US flag-stars and stripes. That was in 1776. Though it is not sure if the story was real or made-up.

This happened during the Revolutionary War. But the reality stands to be that she will always stand out despite the bogus rumors’. Patriotic Symbol was what America colonists needed to unite them. Being the eighth born in the family, she loved to sew everywhere she went. Being a Quaker herself, she was able to learn different crafts. She had an envied life despite the flag rumor. But the fact will always remain that she also struggled in her business deals that were somehow impressive.

Betsy Ross life started at Elizabeth Griscom her birth town on January 1, 1752. She was married to John Ross in 1772. She was once a member of the Quaker religion, but she was expelled. Reason: she married a non-Quaker member. They journeyed their life together and set-up their business, thanks to her skill that she gained from John Webster.

Sadly, John Ross was killed while on his militia duty. She began her widowed life, but she didn’t give up to work hard both day and night. As time passed, she was later married to Joseph Ashburn. But he tragically died when he was still young. His boat was seized in 1780 and was charged with treason. He was later sent to prison and died the next year. In 1783, Betsy was married to a man called John Claypoole. They carried on and were blessed with five children. They continued to manage their upholstery business together. In 1817, John died.

According to sources, it is believed that in 1776, June; President George Washington, Robert Morris and George Ross visited her. They were eager to see her sew the first U.S flag. Besides, her house kept flocking with more than a hundred visitors per day. Note that, there isn’t an evidenced truth about all these. We don’t even know if she lived there. After she made her first flag, she was lucky to get success. Pennsylvania State Navy gave her a job to sew more flags. That is how she was known all over the world. Truss bridge, in Delaware River town, was named after her. Believe it or not, it is the first bridge to have a woman’s name.

It is believed that in 1871 an enthusiastic pamphlet credited Betsy Ross for her creative talent. Not only was she credited for designing the U.S flag but also for emerging with the United States of America name. She wrote a hymn that was the primary basis of the French Anthem “La Marseillaise." As a side note, there is no certain evidence to support these claims.

The good news is that Betsy Ross taught her daughters how to sew, that is before she died. She managed to give her upholstery business to them. At 84, she died in Philadelphia, in the year 1836. Unusual set-backs of burials accustomed her. At first, she was buried at the Free Quaker in Philadelphia. After two decades her remains were moved to Mt. Moriah Cemetery still in Philadelphia. In 1975, Betsy Ross remains were retaken to the courtyard by the Betsy Rose House.