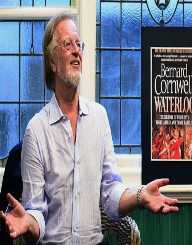 Author Bernard Cornwell was born in London, England in 1944 to a Canadian father, William Oughtred and Dorothy Cornwell. He was adopted into the Wiggins family, a family who were pacifists who belonged to a strict religious sect. It was an unhappy childhood, and when his adoptive father died, Cornwell changed his name by deed poll from William Wiggins to William Cornwell.

Bernard Cornwell was school at the Monkton Combe School in Somerset, England and then enrolled at the College of St Mark and St John in Plymouth, England. He later studied theology but emerged an atheist.

After graduation, Bernard Cornwell worked as a teacher. He then joined the BBC working in various roles and eventually became head of current affairs for the BBC in Northern Ireland. Cornwell was working in Belfast when he met his future wife Judy, a travel agent from America who was visiting the country on business.

Shortly afterward, Cornwell relocated to New Jersey to join his wife-to-be who was divorced with three children. Because Bernard Cornwell was initially refused a Green Card in the States, Cornwell turned to writing fiction. The first book in the Sharpe series resulted in a seven book deal, and Cornwell has continued producing one or two books a year since the early 1980s.

A prolific writer Bernard Cornwell has had many books published. These include the Sharpe Series, The Starbuck Chronicles, The Saxon Stories and other individual works including a series of novels written as co-author with his wife under the pseudonym Susannah Kells.

Bernard Cornwell was previously married and had one child with his first wife. He then married Judy, and they have been married for over thirty years dividing their time between Cape Cod and a home in Charleston.