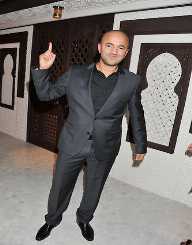 RedOne was born on April 9, 1972. He is a music producer and songwriter. He comes from Morocco. He has written songs for celebrities such as Nicki Minaj, Quincy Jones, Enrique Iglesias and One Direction among others.

RedOne was born on April 9, 1972, in Morocco. He was brought up alongside eight children. When he was young, he was exposed to music from Africa, Europe, and the United States.

He was inspired to start playing guitar and start a band by Europe’s song ‘Final Countdown.’ RedOne later moved to Sweden with his friend Redouan to pursue a career in music. He at first stayed with a friend of his brother in Stockholm before he became homeless. He started selling vegetables and washing dishes to earn a living. He realized that his music career was not taking up, so he decided to study computer studies. In 1995, after conducting experiments with computer technology, he decided to make music with computers. The following year he showed Rami Yacoub who was a former Rock Musician a demo that he had produced using a computer. Rami was so intrigued with the demo that he asked RedOne to work for him. In 2001, he had become a big name in Sweden.

In 2005, RedOne became famous with the songs ‘Break Free’ and ‘My Love Won’t Let You Down’ that he wrote for Daniel Lindstrom. He also wrote Darin Zanyar’s ‘Step Up’ with Zanyar and Bilal Hajji. The song won them a Swedish Grammy and an award for Scandinavian Song of the Year. In 2006, he produced ‘Bamboo’ which was the official song of the 2006 FIFA World Cup. In 2007, he moved to the United States where he met Epic Records. His collaboration with Epic Records led to him being named the producer the album ‘9 Lives’ which was Kat DeLuna’s. Laurent Besencon later introduced him to Lay Gaga with whom he wrote the song ‘Boys, Boys, Boys’.

In 2008, he produced ‘The Fame’ which was a part of Lady Gaga’s debut album. They also produced ‘Poker Face’ and ‘Just Dance’ together. Through Lady Gaga he was introduced to other musicians such as One Direction and Nicki Minaj among other musicians. In 2010, he founded his own label called 2101 Records nor known as RedOne Records in collaboration with Universal Music Group. He also founded the publishing company ‘2101 Songs’.

He married Laila Khayat with whom he has a son called Daniel. He lives with his family in Los Angeles, California. He has an estimated net worth of $20 million. He does not like public life. Instead, he loves his private life private. He loves spending time with his friends and family.