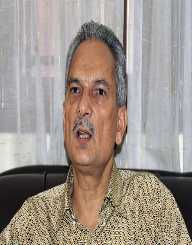 Baburam Bhattarai was the 35th Prime minister of Nepal and apart from politics he is known for his rebellion against the authoritarian government from time to time. He belongs to a family of farmers and his educational career was outstanding. As the Deputy Leader of the Communist Party of Nepal, he fought for the rights of landless labourers. He is against the induction of foreign direct investment and all treaties against national interest of Nepal.

Baburam Bhattarai was born in Gorkha, Khoplang VDC in central Nepal on June 18, 1854. His parents were poor farmers and gave birth to two sons and two daughters.

In 1986, he completed his Doctorate from the Jawaharlal Nehru University, New Delhi.

In the course of the armed struggle, Bhattarai and Prachanda fought over supremacy in the party. Prachanda removed him from the party and incarcerated him. However Baburam was back in the party after the resolution of the power struggle. During 2004 and 2005, both the leaders came together and decided to end the insurgence in April 2006 after negotiation with the government. Bhattarai became second in the party hierarchy of CPN (M) headed by Prachanda. A Seven Party Alliance won the elections after the end of the rebellion by CPN (M) and re-established the parliament which was suspended in May 2002. The new constituent assembly drafted a new constitution which converted the monarchy into a republic on May 28, 2008. The king was deprived of all his powers by this radical change.

Bhattarai contested from Gorkha for a seat in the Constituent Assembly and after his election became the Finance Minister in the cabinet under the leadership of Prachanda. Bhattarai took over as the Prime Minister of Nepal in August 2011 after the resignation of Prachanda in May 2009. He continued to be the Prime Minister till March 2013. Meanwhile, there was another political crisis and the Constituent Assembly was dissolved in May 2012. Chief Justice Khil Raj Regmi took over as temporary head of the government till June 2013 elections. After being a Senior Standing Committee Member and Vice Chairperson of Unified Communist Party of Nepal (Moist), Bhattarai quit the party on September 27, 2015 to support the cause of Madhesis. He was concerned about the plight of Madhesis as they were not allowed to present their demands by the ruling dispensation.

Baburam founded a new political party called New Force Nepal to fight the UCPN (M) government headed by Prachanda. The Interim Central Council of the party gave representation to people from all walks of life such as Maoists, retired government officials, journalists.

In 1998, he published a book Politico-Economic Rationale of People’s War in Nepal. In 2003, a book based on his doctoral thesis, The Nature of Underdevelopment and Regional Structure of Nepal – A Marxist Analysis, was published.

In 2004, he came out with another book in Nepali, Nepali Krantika Adharharu. Baburam has been successful in his mission for getting land for the landless peasants from landlords.

Baburam Bhattarai married another leader from the CPN (M), Hisila Yami and the couple have a daughter, Manushi.