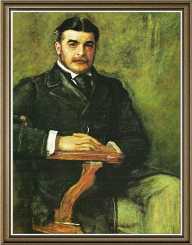 Sir Arthur Seymour Sullivan was born on 13 of May 1842 to parents Thomas Sullivan and Mary Clementina, in Lambeth, London. His father a clarinetist and a military bandmaster. He had a brother named Fred and was taught by his father. Arthur Sullivan became proficient with many instruments and composed "By the waters of Babylon" at the age of eight.

Despite being discouraged from pursuing a musical career by his father, Arthur was a choir boy in the Chapel Royal when he was eleven. He became a soloist and was promoted to "first boy" in 1856.

Arthur Sullivan was encouraged to compose and arrange his pieces by the master of the choristers: Reverend Thomas Helmore. In 1855, O Israel was published by Novello; it was Arthur’s first pieces. Reverend Helmore also enlisted assistance in creating harmonizations for a volume of The Hymnal Noted from Arthur and performed one of the hiss anthems at the Chapel Royal in St James's Palace under the direction of Sir George Smart

Arthur Sullivan was the first Mendelssohn Scholarship recipient awarded by Royal Academy of Music in 1856 when he was fourteen. His principal teacher there was John Goss, and he studied piano with the head of the academy, William Sterndale Bennett, and with Arthur O'Leary. He still sang at the Chapel Royal, as it allowed him spending money.

The scholarship committee extended Arthur’s scholarship for three years, allowing him to study in Leipzig Conservatoire and the music academy. He studied composition, counterpoint, and the piano.

Arthur trained in Mendelssohn's ideas and techniques, but he was also exposed to a variety of musical styles, including Schubert, Verdi, Bach, and Wagner. Arthur stayed in the Leipzig Conservatory for three years, where the school waived its fees for the last year. He credited that period for his musical growth.

His graduation piece: a set of incidental music to Shakespeare’s The Tempest, was completed in 1861 and performed at the Crystal Palace in 1862.

In 1861 he became organist of St. Michael’s, London, despite hating it. The job supplemented his income and allowed him to compose. He produced a few of his famous works while working as an organist: Kenilworth cantata, a ballet, L’Île enchantée, a symphony, and a cello concerto He wrote Overture in C (In Memoriam), to commemorate the recent death of his father in 1866, and it was a commission from the Norwich Festival.

Arthur Sullivan s reputation grew as he wrote for the Grand Festival Te Deum, written to celebrate the recovery of the Prince of Wales from typhoid in 1872. He followed the performance with oratorio The Light of the World the next year.

Arthur Sullivan’s first surviving comic opera was his setting of Sir Francis Cowley Burnand’s Cox and Box in 1867. He had followed through with a few more since then. In 1871, Arthur was commissioned by John Hollingshead to work with W. S. Gilbert. They wrote Thespis, a parody of the Gaiety Theatre as a Christmas entertainment. They worked together for Trial by Jury in 1875.

Arthur Sullivan and Gilbert collaborations were popular and profitable, leading to the start of Savoy Theatre in 1881, their collective work became known as Savoy Operas. Their most successful work was The Mikado, released in 1885.

He received his knighthood in 1883, given by Queen Victoria. His most ambitious work was the 1891 three-act romantic opera Ivanhoe He also had success in his later years. He composed a ballet number for the Queen’s diamond jubilee, the Rose of Persia and many more.

Arthur Sullivan never married, but he had severe love affairs. His dalliances include Rachel Scott Russell and sister Louise. Both relationships ceased by 1869. Arthur’s most extended case was with Fanny Ronald, a woman with two children, who was famous for singing The Lost Chord. As Fanny was not divorced from her American husband, her relationship with Arthur was private.

In 1896, he proposed marriage to a  22-year-old Violet Beddington, he was the fifty-four at that time, and she refused to marry him.

Arthur Sullivan loved to spend time in France and gambling. He was initiated into Freemasonry in 1865 and was the Grand Organist of the United Grand Lodge of England in 1887.

Arthur Sullivan was also a family man, particularly his mother. When his brother Fred died at the age of 39, Arthur became guardian to all of the seven children. He contributed financially to his nieces and nephews in his life, and in his will. His oldest nephew Bertie stayed with him until his death.

Arthur Sullivan died of heart failure while recovering from bronchitis, at his flat in London on 22 November 1900. The Emerald Isle was an unfinished opera, and it was completed by Edward German and produced in 1901.

Te Deum Laudamus, which he wrote to commemorate the end of the Boer War, was performed posthumously. By order of the Queen, Arthur was buried in St. Paul's Cathedral instead in Brompton Cemetery with his parents and brother.

Arthur Sullivan had a knighthood and many awards. Universities Cambridge and Oxford awarded him with Doctor in Music, honoris causa, as well as Chevalier, Légion d'honneur, France in 1878. He was given The Order of the Medjidieh by the Sultan of Turkey (1888), and appointment as a Member of the Fourth Class of the Royal Victorian Order (MVO) in 1897.