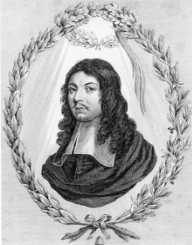 The English poet Andrew Marvell was born on the 31 March 1621 in Winestead-in-Holderness, Yorkshire, England. His parents were the Reverend Andrew Marvell and his wife, Anne. When the poet was three years old, his father was appointed a lecturer at the Holy Trinity Church in Hull and a master of the Charterhouse.

Andrew Marvell attended Hull Grammar School and in 1633 enrolled with a scholarship to Trinity College Cambridge. He obtained a BA in 1639 and was intending to complete a master’s degree but left after his father was drowned.

Andrew Marvell was sixteen when two of his poems were published in an anthology of Cambridge poets. One song was in Latin and the other in Greek. He spent the 1640s traveling in Europe and was abroad when the English civil wars took place. In 1650 he was appointed as tutor to Mary Fairfax, the daughter of Sir Thomas Fairfax, a retired Lord General. Mary Fairfax was later to become the Duchess of Buckingham. During this time he wrote some non-satiric poems including Upon Appleton House, To His Coy Mistress and The Definition of Love. He also met the poet John Milton in 1653.

On Milton’s recommendation, Andrew Marvell was appointed Assistant Latin Secretary to the Council of State in 1657. During this time he became tutor to William Dutton, Cromwell’s ward. Later that year he was made assistant to John Milton, Latin Secretary for the Commonwealth. By 1659 he was a member of parliament for Hull, and he continued in this role until his death.

Andrew Marvell spent the last two decades of life involved in politics. He traveled to Europe and Russian, producing satires as well as political pamphlets. Marvell was a well-respected politician who was in Cromwell’s government as well as in parliament during the Restoration where he represented HullHis satires included both royalists and republicans.

Andrew Marvell is considered one of the most beautiful poets of the seventeenth century.

Andrew Marvell died of fever on the 16 August 1678. His nephew compiled his Miscellaneous Poems and published in 1681.